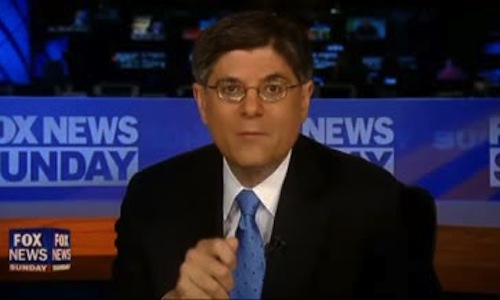 Kudos to Chris Wallace of Fox News Sunday for doing his patriotic – and journalistic – duty during a verbal wrestling match with Treasury Secretary, Jack Lew.

The bout resulted in Jackie boy being pinned to the mat.

Much to his chagrin, Jack came up against a logical, fair and smart journalist who, on behalf of America, outlined the incongruous series of statements coming from the Obama administration, which were accompanied by simple questions to the befuddled Lew.

Wallace skillfully exposed how bogus this administration’s arguments and excuses are proving to be. Mr. Lew stressed that Congress failing to raise the debt ceiling will be “catastrophic,” not to mention “irresponsible and reckless.” But Wallace, at his journalistic follow-up questioning best, then asked him, if that’s true then why is the president refusing to negotiate?

For the first half of the interview, when discussing the budget, Lew appeared flustered, and finally suggested Congress just “do its job.” Said Lew to Wallace:

You know we’ve just spent the last several months with Congress creating this ridiculous choice where either you repeal the Affordable Care Act or you shut down the government or default on the United States. That is not the way we should do business.