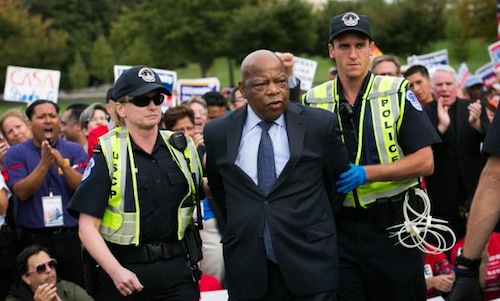 A group of race-pimping members of the Congressional Black Caucus decided to relive the glory years, when Democrats were oppressing blacks.

So they staged an assault by Capitol Hill cops.

The politicians, along with activists who attended an immigration rally on the National Mall Tuesday afternoon, staged a sit-in near the west side of the Capitol.

This is what happens when you have too much time on your hands. These disingenuous dingbats created a mock arrest and obvious publicity stunt as part of their fight to allow illegals to overrun the country.

These silly Negroes want America to believe that they are fighting for “black America” — the part they claim to represent — but their real intent is only to hurt America, or what they deem as “white America.”

Members of the CBC are constantly looking for some “racial” issue where none exists. These fools were not arrested. They can’t gin up the days of MLK Jr., and the REAL civil rights movement against racist Democrats. So they try these publicity stunts to test the water.

America is waking up to the game of the true racists in this country.

And if the CBC believes that America will roll over and allow amnesty for those who have stolen from this country, they will find that we are a lot tougher than they think.