Despite what Representative Gwen Moore (D) says, the GOP is not trying to punish America for re-electing Obama. 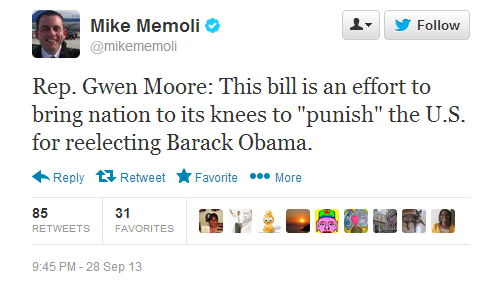 Obama is doing an excellent job of punishing America ALL BY HIMSELF!

It’s amazing with all the evidence of the destruction by the Obama administration, whose policies mimic “spend-thrift” George Bush on steroids, and yet the Democrats support Obama no matter what.

The nation has resorted to getting on its knees for the Chinese and other lenders.

If you are waiting on black Liberals like Rep. Gwen Moore to wake up, don’t hold your breath. Until Obama runs out of “other people’s money,” we will be subservient.

If not stopped, soon we’ll be slaves upon our knees.