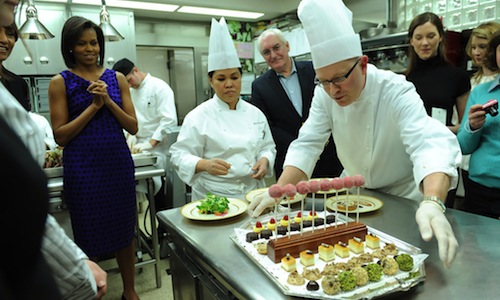 In the discussion of the “keepers” and “throw-aways,” or what the government calls “essentials” versus “non-essentials,” I got curious.

Aside from the notion that government has any idea what’s essential or non-essential, this is a bad way to look at people.

Imagine you are told that your job is non-essential. The government pronounces to the general public that you must treat everybody equally and fairly. However, they have a program to determine who to keep and who to throw away. Who gets paid and who doesn’t.

The people who make that determination? The ESSENTIAL.

Why doesn’t government cut jobs like a lottery? One could argue that the way government runs, a congress of baboons could do a better job.

As I delved further into this issue, I found somebody who asked a good question: Are White House Chefs “non-essential?”

I did say chefs…plural. The WH has more than ONE chef, I learned.

The Obamas are known to eat quite well, at least in public, where they can be seen frequenting trendy spots around Washington and landing in over-priced restaurants aimed at vacationers when they’re in Hawaii and Martha’s Vineyard. At home in the White House, a team of chefs plans menus for the Obamas and prepares an endless series of tasty meals.

The Obamas can afford to eat out every night or have the SS oversee take-out food if the First Couple prefers to order in. They don’t need two chefs, and in fact they don’t even need ONE.

Let Michelle Obama get her butt in the kitchen and cook a meal for her family. That’s what ORDINARY Americans do. At the very least, let Barack Obama microwave something.

These self-indulgent narcissists can live like the rest of us, until Barack Obama stops spending, and starts listening to the people who matter: Tea Party Americans!