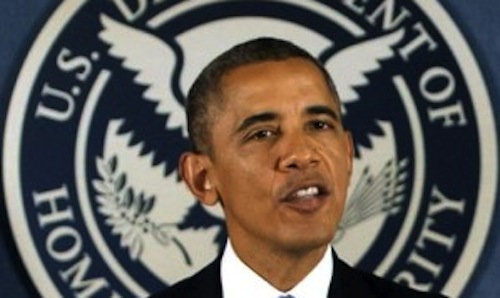 Sometimes God has a funny way of sending a message.

Burning bushes, plagues, locust, famine and Philistines. Regardless of the mode of delivery, rest assured,  if the Lord has something to say, He finds a way to say it.

It happened when  President Obama was speaking about hurricane preparedness to Congress.  While yammering away, the president, through no effort of his own, placed his head smack dab in the middle of a Department of Homeland Security insignia.

You ask: “What does that have to do with God sending a message?”

Well, based on the photo, it appears as if the President has sprouted two jagged horns.

Some  may argue that they look like wings, but I beg to differ. Traditionally, wings are on your shoulder.  These protuberances are smack in the middle of his head – one on each side.

So think what you will, but from the looks of things, for those  wavering in their initial discernment and trying desperately to see Barack Obama in a favorable light, the question has been answered as to what America is currently dealing with.

God has confirmed our suspicions by sending us an other worldly image of  Barack Obama sporting a set of horns.