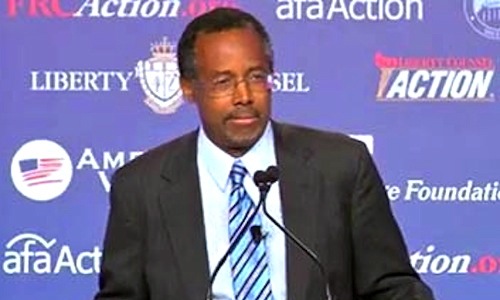 With all the talk about oppression and slavery in this country, it took a black man to warn the ignorant masses that slavery comes in many forms.

As Obama chains up Americans and herds them onto governmental slave ships, taking them further and further from Freedom’s shore, a man who escaped captivity himself is issuing a cautionary admonition.

Retired world-renowned neurosurgeon Dr. Ben Carson, whose single mother did everything in her earthly power to ensure her sons were never forced into servitude to a system many blacks in America refuse to flee, recognizes bondage when he sees it.

Delivering a speech at the Value Voter’s Summit in Washington, DC, Dr. Carson, who has already been investigated by the IRS for speaking truth to Barack Obama’s unbridled power, called the president’s healthcare bill modern-day slavery.

“Obamacare is really, I think, the worst thing that has happened in this nation since slavery. [Obamacare] is slavery in a way because it is making all of us subservient to the government.”

The brave doctor spoke more truth when he said that the Affordable Care Act is neither affordable nor about health care.  According to Carson, the ACA is strictly about the government wresting control from a system that used to be “of the people, by the people and for the people,” but sadly, no longer is.

“That’s why when this administration took office it didn’t matter that the country was going off the cliff economically.  All forces were directed toward getting this legislation passed,” maintained Dr. Carson.

In other words, to those at the helm, economic disaster is a small price to pay for gaining the sort of master-and-slave control that progressives have salivated over for hundreds of years.

Carson’s was a bold statement indeed. And bolder yet, he all but compared Barack Obama to Soviet leader Vladimir Lenin when, in his usual calm and measured tone:

“Vladimir Lenin, one of the fathers of socialism and communism, said that socialized medicine is the keystone to the establishment of a socialist state.”

So, as Americans find themselves crammed together in the stowage of a bureaucratic slave ship aptly, called the SS Obamacare, they should take note: The ship is jam-packed and unseaworthy, and has the potential to quickly become exceedingly inhumane.

Nonetheless, the slave masters press on, “fundamentally transforming” Americans into chattel and selling us into a system most Americans recognize as oppression.  And as we the captives strain against the heavy chains of government officialdom, many among us are realizing, too late, that those who are burdening us don’t give a damn about the cries for freedom from below decks.

Thankfully, Dr. Ben Carson, upstanding patriot that he is, has the temerity to expose the evil machinations of one bitter (half-)black man and his posse of power-hungry progressives. Carson knows slavery when he sees it.

And Dr. Carson understands that Barack Obama has plans to sweep everyone — black, white, and brown — into a government system that, if successful, will have virtually total control over all our lives.