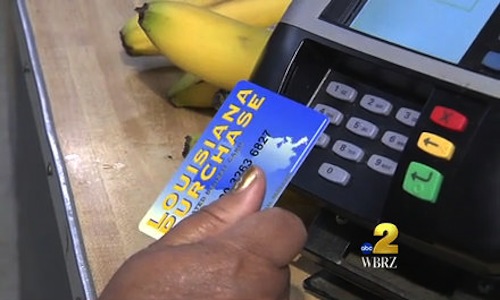 President Obama claims the debt ceiling must be raised in order to pay America’s bills.

Meanwhile, as Democrats and Republicans quibble, during a routine backup test the EBT system for food stamps crashed,causing a “glitch” in several states where, for a window of time, EBT cards had no limits.

So, in other words, food stamp recipients got to experience what Barack Obama repeatedly demands: the ability to spend money that’s not his, and do it with wild abandon and no limits!

In Louisiana, one of the states affected by the backup test power outage that crashed the EBT system, food stamp recipients in Springfield and Mansfield seized the open-ended opportunity at a local Walmart, joining Barack Obama in his quest to steal from Americans by spending above and beyond the limit.

Viewing the “glitch” as having the food stamp threshold raised, and in keeping with the spirit of ‘raise the debt ceiling’ madness, patrons with EBT cards cleared the shelves when corporate Walmart allowed the EBT cards to be used…