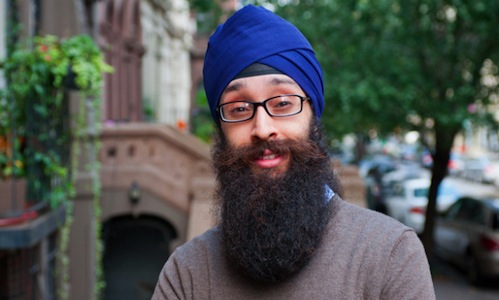 A Liberal professor who constantly rails against “white racists,” got a taste of some black racism.

Columbia University professor Dr. Prabhjot Singh dropped his wife and his 1-year-old son off at home on Saturday night, then went for a short walk in home neighborhood of Harlem.

He and a friend walked past a group of 25 to 30 young men, many of whom had bikes, when he heard, “Get him!” as well as “Osama” and “terrorist” being yelled.

As I have joked, a poll was taken of whites and 79 percent said if they saw a group of black teens coming towards them, they would cross the street. The whites were subsequently called racist. The other 21 percent of whites were called VICTIMS!

In humor is truth.

As was reported at BuzzFeed:

Someone grabbed his beard and he was hit on the chin. All of the bikes began to mobilize and he started to run. The assailants on bikes started taking swipes at his head and a couple hit him in the chest. He was punched in the face repeatedly and he fell. That’s when the group converged on him, hitting him in the head over and over again.

There wasn’t much going through his mind at the time. He tried to protect himself while the punches rained down on his head as his body lay on the sidewalk. That’s when bystanders came to his aid.

In his first comments since the brutal attack, Singh tells BuzzFeed that he doesn’t remember much about the suspects — except that most were African-American — yet he says the police investigation and catching the attackers is not foremost on his mind.

“This is my community, I live in Harlem, I see patients here,” he says. “It’s not the side of Harlem I’ve come to know and not how I’ve been embraced.”

The New York Police Department says the attack is being investigated by the Hate Crimes Task Force.

Singh “was assaulted by a group of approximately 15 to 20 males who were all on bicycles,” according to police. “He sustained a lacerated lip and an injured jaw and was taken to Mt. Sinai Hospital.”

Sometimes Liberals need to learn lessons the hard way! Perhaps the professor will have a different lecture in the days to come?

Hey Professor: You might want to GET A GUN!