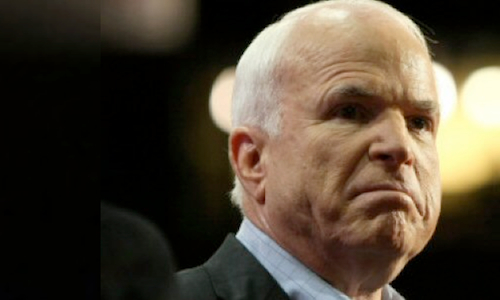 John McCain wants to be in the Senate forever!

There’s only one bit of news I can think of that would be less troublesome from John McCain. It would be a little less disturbing if he announced preparations for trans-gender surgery.

That’s right. John McCain, the darling of true Conservatives everywhere has announced he’s considering running for the Senate yet one more horrible time. McCain, who will be 80 years old in 2016 said the following,

“I’m seriously thinking about maybe giving another opportunity for you to vote for or against me in a few years from now,” McCain said on KFYI-AM in Phoenix. “I’m seriously giving that a lot of thought.”

Here’s something else for you to ponder, Senator McCain. How about “No, the heck no”!!! America had the opportunity and America said NO!!!

As if you haven’t caused American Conservatives enough grief over the years constantly capitulating to Progressive norms, now you want to spend your geriatric years making yet another grab for senatorial power??? You’ve been given a chance to stand up for true Conservatives, but instead you opened your half-wit pie-hole to put them in their place!

And what is that place? Bowing to the RNC establishment INSTEAD of standing for the principles that got them elected in the first place!

I thank you for your military service, but ENOUGH IS ENOUGH! You have proven you have little to no allegiance to Conservative values!

Do you remember the hell you and your lackeys put Sarah Palin (a proven Conservative) through before and after the 2008 election? There are a whole lot of Conservatives out here who do.

So, before you waste America’s time, understand that we will not sit idly by and see our Nation destroyed by someone claiming to be one of us.

If there’s anything you’ve proven since 2008, it’s that you’re not devoted to Conservative values.

So,do us all a favor, John: If you want to change the world, pick up a hammer and go hang out with Jimmy Carter for a while. We Conservatives may despise Jimmy, but at least he can show you a thing or two about being who you are. He KNOWS he’s not a Conservative.