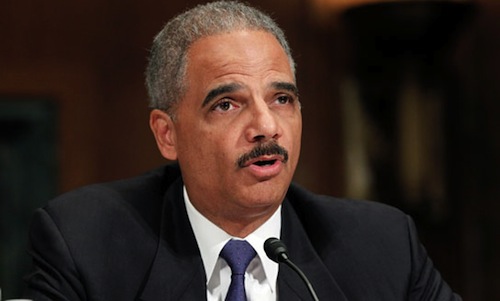 Eric Holder should NOT be in jail. He should be UNDER the jail!

The Department of InJustice Holder is a total slimeball! But he may be out on his boney butt soon, because at least one judge saw through the nonsense that is Holder.

A federal judge has rejected Attorney General Eric Holder’s attempt to keep the courts from wading into the “Fast and Furious” documents dispute that led to him being held in contempt by the House last year.

In a ruling Monday night, U.S. District Court Judge Amy Berman Jackson turned down the Justice Department’s request to dismiss a lawsuit brought by the House Oversight and Government Reform Committee after President Barack Obama asserted executive privilege to prevent some records about the administration’s response to the “Operation Fast and Furious” gunrunning scandal from being turned over to Congress.

Hopefully now that this hurdle is cleared, we can get to the bottom of Obama’s and Holder’s scheme to ship guns to Mexico in order to create enough instability to grant amnesty to millions of illegal Mexicans.

If the truth comes out about this, more than just these two Head Negroes in Charge will go down.