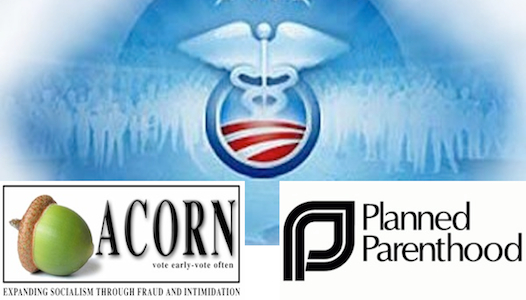 As if you wouldn’t have predicted this: guess who the navigators are? And better yet ask what they are getting PAID?

If you guessed SEIU, the remnants of the former ACORN, and Planned Parenthood, you would be right.

If you’ve been listening to Rush Limbaugh’s radio show today, you know this already: President Obama’s old friends in the ACORN crime syndicate have decided to get a piece of the big-money Obamacare action.

United Labor Unions (ULU) Local 100 in New Orleans, which is run by ACORN founder Wade Rathke, announced on its Facebook page that it’s gearing up “to do mass enrollment and help navigate people into the marketplaces in Arkansas, Louisiana, and Texas under the Affordable Care Act!”

Before his calamitous 38-year tenure as ACORN chief organizer ended in his expulsion from the group in 2008, Rathke covered up a million-dollar embezzlement involving the nonprofit’s pension funds. He presided over massive campaigns involving identity fraud in furtherance of voter fraud. (ACORN even knowingly hired felons convicted of identity theft to work on voter registration drives, giving them custody of sensitive voter information.)

Their pay? $48 an hour. I’d say that’s a livable wage! And a bit more than you likely made in your “job that Obama was unable to save.”

Yet these uneducated (for the most part) unionites and baby killers will be paid with American taxpayer money to cheat the system.

The company who got the contract to hire navigators, SeedCo, was sued by the Fed a few years back for manipulating data. Now that the Fed NEEDS this criminal element, SeedCo is back in the government’s good graces.

SeedCo will register illegal aliens on ObamaCare in order to pad the voter rolls, and American taxpayers again will pay for our own demise.

And the government wonders why the grass roots exists. They are lucky we haven’t really gotten pissed.

ObamaCare is just one more campaign payoff to the mindless sheep who voted for him…13 times each.