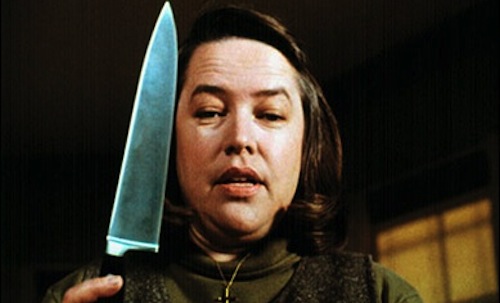 In the history of Hollywood there has never been a movie that more closely depicts the state of American politics today than the screen adaptation of Stephen King’s horror novel Misery.

When Wilkes found Sheldon, the successful writer was in a less-than-optimum position. Wilkes rescued him from a car crash in a snowstorm and then took it upon herself to nurse his broken legs and dislocated shoulder back to health.

For Barack Obama, his original intent, likewise, was to rescue America from what he believed was a condition in dire need of “fundamental transformation.”

Let’s face it – when Barack Obama inserted himself into this nation’s recovery, we were economically injured and in need of assistance. So, like Annie Wilkes, Obama claimed to be America’s “number one fan,” but as it turned out harbored a deep-seated grudge against the nation he supposedly admired.

That’s why, not long after Mr. Obama cozily pulled America to his bosom, like a political Annie Wilkes, his true feelings toward those he wanted to save began to emerge.

First, Annie purposely spilled hot soup on Paul. Barack’s hot soup-spilling began when he bad-mouthed America to the Muslim world and pushed through a failed stimulus package that exacerbated an already-injured economy.

It didn’t take Paul Sheldon long to realize he was trapped in a hopeless and helpless position.  Making matters worse, Annie Wilkes bought and read a copy of his latest novel, Misery’s Child. After learning that Sheldon “killed off” the heroine, Misery Chastaine, Wilkes became enraged and attempted to bash Paul in the head with a table.

And isn’t that pretty much what America has been enduring under Barack Obama’s leadership for the last five years?  A president who refuses to let misery die?

Intermittently, while allegedly caring for our needs, Obama becomes visibly annoyed when the majority doesn’t agree with him and inflicts damage out of spite.  Siccing the IRS on Tea Party activists, denying critical care to sick children, closing the WWII Memorial, and refusing to pay death benefits to fallen heroes are analogous to Annie clobbering Paul on the head.

Much like a victim of the sadistic Wilkes, Obama currently has America in an inescapable predicament and clear-thinking people in this country, although desirous of escape, are finding themselves trapped, broken country and all.

In the movie Misery, Annie tore up and set fire to the US Constitution – er, I mean Paul’s manuscript, and insisted he write a new novel resurrecting Misery and call it Misery’s Return.

Obama, too, is in an ongoing effort to rewrite the US Constitution, making a concerted effort to submit a new manuscript in which misery lives on.

Desperate to escape, in the movie Sheldon locates and stockpiles the stash of painkillers Nurse Wilkes uses to numb his pain.  Similarly, America is now captive to a healthcare system nobody wants, held there by a president determined to administer political painkillers – for our own good?

Knowing full well that Annie, like Obama, doesn’t take well to insubordinate behavior, Sheldon, like America, out of fear for his life, pretends to accept and appreciate Wilkes’ efforts on his behalf.  Sadly, Sheldon’s initial attempt to depose Miss Annie during a faux romantic dinner fails when she accidentally spills the wine he drugged.

Once when Annie went out, Paul secretly ventured out of the room and found a scrapbook full of newspaper clippings chronicling her secret past. Seems Wilkes, much like the most pro-choice president in the history of this nation, was suspected and tried for the deaths of several infants.

In addition to funding and encouraging dead babies, Obama’s secret scrapbook is chock full of revelations about his radical past, his immature attitude, and his astounding level of incompetence.

As for Annie – Paul was craftier than she thought.  After off-in-the-head Wilkes killed local sheriff Buster, Paul pretended to agree to the suicide pact she proposed, but only on the condition that she allow him to finish his novel and “give Misery back to the world.”  Annie agreed.

After finishing the book, while Nurse Wilkes fetched a celebratory champagne flute for herself, Paul drenched the manuscript with lighter fluid and set fire to his work, which resulted in a violent confrontation ending in Annie’s much-deserved death.

So there is hope!  If things go the way they went in Misery, Barack Obama’s insistence on setting the Constitution on fire may very well result in a rewrite that ushers in his political demise.

Meanwhile, as time goes on and the President’s approval rating continues to plummet, he’s not strapping us to a bed and breaking our ankles. But the malicious nature of Obama’s response when he doesn’t get his own way, while not a literal “hobbling,” is quite similar in the misery it delivers.

May God Almighty grant us a way of escape from Obama’s misery!