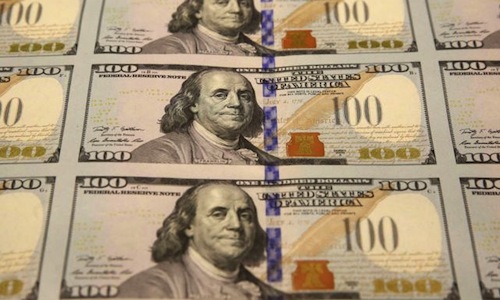 Far be it for a government shutdown to thwart the printing of newly designed C-Notes!

According to the newmoney.gov press release:

The Federal Reserve on Tuesday began supplying financial institutions with a redesigned $100 note that incorporates new security features to deter counterfeiters and help businesses and consumers tell whether a note is genuine.
Distance, demand, and the policies of individual financial institutions will influence how quickly the redesigned notes reach businesses and consumers around the world.

“The new design incorporates security features that make it easier to authenticate, but harder to replicate,” said Federal Reserve Board Governor Jerome H. Powell. “As the new note transitions into daily transactions, the user-friendly security features will allow the public to more easily verify its authenticity.”

The Federal Reserve, U.S. Department of the Treasury, U.S. Bureau of Engraving and Printing, and the U.S. Secret Service partner to redesign Federal Reserve notes to stay ahead of counterfeiting threats.

The redesigned $100 note includes two new security features: a blue 3-D security ribbon with images of bells and 100s, and a color-changing bell in an inkwell. The new features, and additional features retained from the previous design, such as a watermark, offer the public a simple way to visually authenticate the redesigned $100 note. 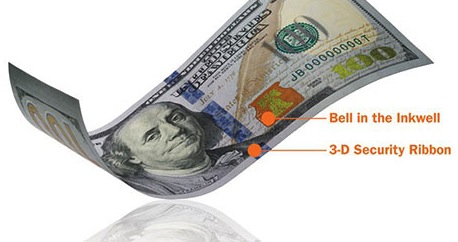 The Department of Treasury told Credit Union Times that the congressional appropriations process does not affect the printing of the new note.

“The Bureau of Engraving and Printing is responsible for producing the bills and the Federal Reserve is the issuing authority,” said a Treasury Department spokesperson.

“Both are funded from sources other than annual Congressional appropriations and are unaffected by the shutdown,” the spokesperson said.

The moral of the story in the era of Obama?

Veterans and War Memorials are an unnecessary expense, even if privately funded…but printing more money in anticipation of more flexible and ever higher debt limit is always a good idea!

The only surprise? Benjamin Franklin still adorns the $100 dollar bill, rather than the current, narcissistic POTUS.

Related:  Normandy was closed when we got there too