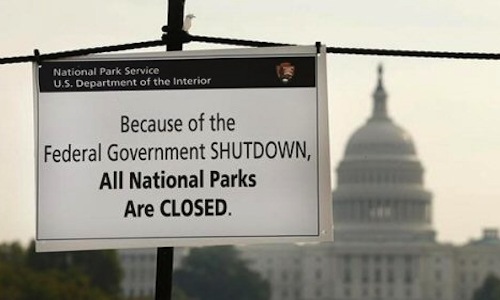 The Old Dead White Guys are making in comeback in a town near you!

No, it’s not the name of a poorly-described boy-band. I’m talking about the Founding Fathers. And it looks like they may have known a thing or two about a thing or two after all.

What do these headlines have in common?

2. WIC program to stop issuing benefits due to government shutdown

ANSWER: The subjects of each story is better served being taken care of personally, by the Church or by LOCAL Government. Not by the Federal Government! (alright, Miley should be taken care of by her parents… I just threw that in for kicks).

If your EBT card shuts down for a day and you’re in danger of starvation… you might be a slave.

If you want to drive by and take a look at Mt. Rushmore, but there are barricades blocking your view… you might be a slave.

If your life is affected to the point you cannot function without the Federal Government… you might be a slave!

The current shutdown has shown the Federal Government functions poorly at best! When given absolute control it will absolutely screw up anything. An all-powerful government will hold that power over our heads like Larry Flynt clutching a Republican Senators’ FBI file.

One “old, dead white guy” put it this way:

“A government is like fire, a handy servant, but a dangerous master.”

And from all indications, the roof is on fire.

A superficial knowledge of History shows that unbridled Government is not only a dangerous master, but a deadly one. Something happens to men when given unchecked power over other men. It appeals to their base nature. It leads them to exercise control in a manner detrimental to the Governed.

“I hope we once again have reminded people that man is not free unless government is limited. There’s a clear cause and effect here that is as neat and predictable as a law of physics: As government expands, liberty contracts.” ~ Ronald Reagan

The increase of government and the reduction of liberty is what we are seeing in Government run schools and in Federal assistance programs. We’ve seen it in the dictatorial restrictions placed on our National Parks and Monuments.

Whatever you may think of the current battle over Obamacare and the budget; no matter how you feel about Democrats, Libertarians, Republicans or the Tea Party, it’s abundantly clear that the Federal Government when given the authority CAN and WILL abuse that authority to its own end.

Slavery was defeated in America before. Why would we want to re-enter that dark period in our History?

We are at a pivotal point in America’s history. We, the people will decide to live as freemen, or be subjugated by the type of Government from which those “old, dead white guys” worked tirelessly to protect us.

Bearing in mind the phrase, “We, the People” means precious little in light of tyranny’s ever-increasing thirst for power.