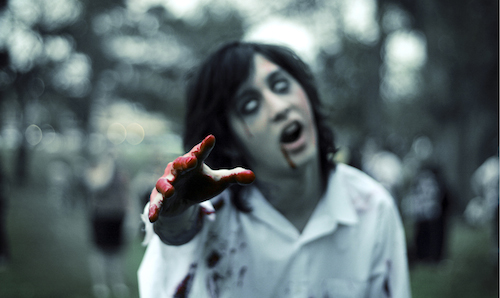 “They’re coming to get you, Barbara.” So begins the terror of Night of the Living Dead.

Obamacare is coming to get you, too. Watch your six all you want – you won’t be able to stop it. You’ll see it coming but it’s already too late – you’re a dead man walking.

Zombie-like, it will go after you. It won’t stop until it’s got you. It will eat your heart out. Its unthinking regulations will squeeze the life out of you with mindless iteration. It will suck out your identity and spit it on the ground for all the world to see.

Obamacare’s machinations only care about one thing – everything you’ve got that it can take. Shoot it in the head.

Maybe it’s more like a vampire – seducing you with promises before it turns on you, sinks its voracious fangs into you and sucks out your blood while you weaken and die.

“Don’t do it,” I always shout to the hapless woman as she takes that final stroll. “Do you think he really cares about you? Well, I’ve got a bridge to sell you.”