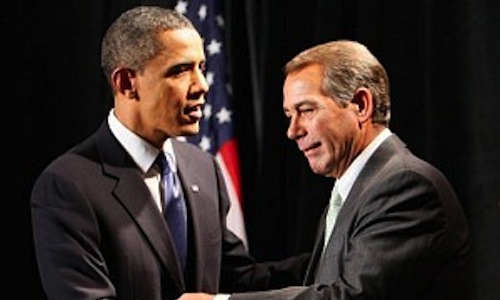 Nothing has changed with the slavery-sanctioning Democrats: Obama wants people to be controlled. Period.

In a recent interview on WABC, Barack Obama said this of Boehner:

“There have been repeated situations where we have agreements…Then he goes back and it turns out that he can’t control his caucus.”

Control his caucus? So that’s how it works in DC?

Boehner has people under his control. Interesting. So some of the reputedly “most learned people” in America go to Washington to get a handler. Who knew that becoming a representative of the people meant that you must submit to a “controller”?

Obama wants Boehner to control his slaves, because Obama wants to do what he excoriated Bush for doing back in 2006.

How telling is Obama’s statement, the absurd notion that Boehner, a “moderate” Republican (aka RINO), is expected to get “control” of his caucus. Boehner is being influenced by that radical Tea Party bunch, who actually expects the government to start solving problems, instead of creating more.

Control those terrorists! Don’t they know how things work in Washington?

America has lost its way over the past decades, and we have allowed men like Obama and Boehner to define “leadership.”

A leader has emerged in Washington. He’s the type of leader that historically Democrats would exalt. An Hispanic with no Hispanic dialect. Except this Hispanic possesses the wrong ideology: Conservative.

Ted Cruz is as subtle as a shuttle launch. But what most irritates Washington on both sides of the aisle is that Cruz is a doer.

Washington is accustomed to the “union” approach to work, where 5 guys watch one man do the job of half a man. When somebody comes in and shows how inefficient and ineffective the Washington insiders are, DC-insiders seek and destroy the new-comer adversary.

Ted Cruz doesn’t respect their traditions, particularly the tradition of following those who do not know how to lead.

Why should Cruz ask for permission from Mitch McConnell to do something? As my grandmother would say, “He’s a grown ass man!”

Grown ass men don’t ask for permission. This is the reason why Ted Cruz has been targeted. Cruz doesn’t want to be controlled. He is a true maverick who has replaced the fake maverick, John McCain.

How silly it is for Washington to believe that Congressmen and Senators, elected by their constituents, should venture to DC to become puppets of other men.

I respect those who have gone before me, when they deserve respect. Most DC politicians deserve NO respect.

Each year America’s so-called representatives get greedier and more power hungry, and they spend most of their time conniving against the very people they were elected to represent. They take advantage of every group they claim to care about, using children, the elderly, and the military as pawns.

In that one small soundbite, Obama revealed how things work in Washington. Submit, and you get the goodies. Goodies which include all the riches you can imagine—money, the best committees, other perks, but most importantly…a seat at the table. Continue in your submission to the power structure, and one day you may become a “shot caller.”

Washington is a cesspool of corruption, and that’s because DC politics possesses an amazing drug. It is an aphrodisiac, a hallucinogen, a pain killer, and euphoric all rolled into one. It’s the most addictive drug on the planet: POWER.

This is why far too many politicians die in office. Wealthy men with all the riches in the world refuse to leave office and would rather DIE in office than enjoy their trophy wives and all that the world has to offer.

Power is not lazy, as it loves to be exercised.

Obama has given America ObamaCare, aka the Unaffordable Care Act, knowing that he will never be on it. Congress exempts itself from the ACA, along with most legislation they pass for us. The laws don’t apply to the lawmakers.

Right now, it’s the Tea Party who Obama, and even some Republican politicians, see as radical. Soon they will see anybody who questions their motives, which is to say interrupts their cash flow, as a threat.

A warning from Obama that the American people don’t elect representatives; they elect “handlers.”

Thankfully the Tea Party has put a couple of people in Washington, who will not be controlled.