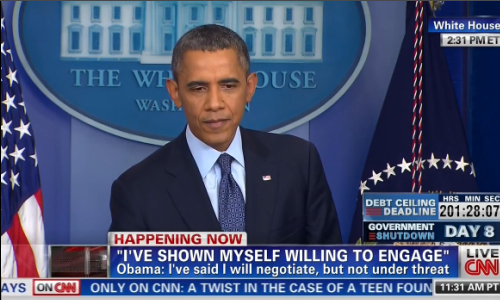 To think they jumped on Romney like ugly on Whoopi when he mentioned the 47 percent.

Here is Obama calling people who get behind on their mortgages, “Deadbeats.”

Well I know lots of deadbeats! And Obama is creating these slackers at a frantic pace.

According to Think Progress:

Nearly half of the mortgages modified in the Home Affordable Modification Program (HAMP) program, the Obama administrations main program meant to prevent foreclosures, are back in default, according to a report released Wednesday from the Special Inspector General for the Troubled Asset Relief Program. The program was started in 2009 to give struggling homeowners loan modifications and help them avoid foreclosure.

Liberals create deadbeats, then look the other way. Even a 3rd-grader can connect the dots on how this all started, with Liberal do-gooders mucking up the system. THEN when Lefties claim to fix it, better keep your eyes on the money.

Barack Obama has some nerve. He has lead America into the Greater Depression, and hasn’t a care in the world. Let’s see what he has to say about those who don’t pay their bills when the American taxpayers takes away his checkbook.

File this under “Obama is a Fraud.”