So he took his battle to Twitter, where Obama is reported to have almost 36.5M Twitter followers, unfortunately most of them are fake.

Those who are real thought that’s where they sign up for the “free sh*t,” so I’m not sure how well Obama will do in the Twitter battle that erupted when he called out Speaker Boehner on ObamaCare.

Obama made a desperate move to get the formerly star-struck minions to back his play. So far it’s gone over like a pregnant pole-vaulter.

But the most surprise tweet came from Rep. Justin Amash, R-Mich, who tweeted: 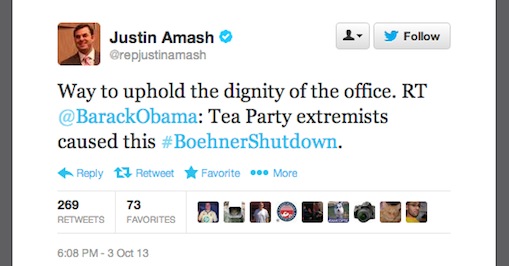 Obama will find out that the Tea Party has more power than he imagined, as we continue to showcase his lunacy to the rest of America.

All the tweets to fake followers won’t help him: the sky is falling…for Liberals.