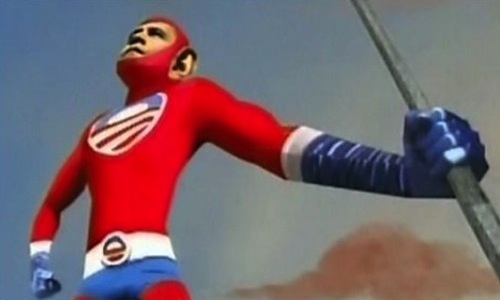 It didn’t take long for the Leftist media to make Obama a super hero in his Rose Garden equivocation around ObamaCare.

At the non-event, a woman fainted. Lucky for her, there was a black super hero nearby, who–as CNN titled it–“…catches fainting pregnant woman.”

Who knew she was pregnant!? Obama actually saved TWO lives!

The reason that woman fainted certainly wasn’t because Obama spoke so long and was so boring that the woman FELL ASLEEP ON HER FEET!

Oh hell no. It was because the woman was…pregnant.

“She fainted when she realized how much her healthcare coverage went up!” – Paul Croteau

Lucky for her, Baby Black Jesus was nearby to save her from herself. Although the bad news is she will still be, in the words of Barack Obama, “punished with that baby.”

Obama was supposed to explain why his new healthcare website is FUBAR, and the mainstream media turned it into a circus. And that is the job of the MSM…to distract!

The media needed to deflect, as Obama explained why not being able to log onto a site that cost $678 million (and counting) is no big deal. Many websites don’t work. What’s the big deal about that.

The fact that Obama is NOW flying in “experts” is not to be questioned. So what it will take billions more to fix what Obama reminded us, really isn’t broken, though it doesn’t work. And the coverage remains mandatory.

Obamacare, according to our hero, is still viable, and Obama assures us that things will work out.

Well that’s good enough for me!

America (and the world) should feel comfort that no matter how dire the circumstances: Obama remains America’s Super Hero and he is nearby to save the day.

“If it were Bush, CNN would have led with ‘Bush nearly knocks over pregnant woman during speech.'” – Paul Croteau