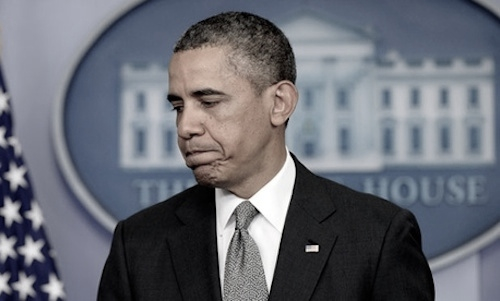 The simple truth is that if Obamacare were proposed by a white Republican president, rather than 1/2 white Obama, Liberals would be having coronaries.

Can you imagine a botched rollout of BushCare, and the multitude of names it would be called?

After all the hyperbole by racist Democrats about Republicans being out to get Obama, with Benghazi, Fast and Furious, the IRS scandal, and the multitude of other faux pas, Obama has lynched himself with ObamaGlitch.

The Left is now so scared of ObamaCare, they are demanding the use of ObamaScare’s REAL name.

Many on the Left are now looking for an extension…you know, that thing that Ted Cruz was demonized for proposing. Amazing how good things sound to Democrats when (1) their backs are against the wall, and (2) they claim stolen ideas as their own.

Despite Democrats recognition of the futility of fixing Obamacare, they are getting wackier.

My prediction from a few months ago is coming true: Democrats are now blaming Republicans for Obamacare.

Apparently the website is so temperamental that unless the site is liked by Republicans, the site won’t function. Who knew Republicans had that kind of power.

According to ObamaBots, poor people want to pay for their own healthcare, complete with deductibles and co-pays. And let’s not forget that pesky penalty for non-compliance. The failure to launch of ObamaGlitz’s website couldn’t possibly be because of government incompetence.

Republicans didn’t pick the company where an executive is Michelle Obama’s Princeton friend to oversee the technical side of the launch. And by the way, that same company is where Obama’s Chief of Staff Valerie Jarrett’s daughter and son-in-law work. I know…coincidence.

But as I have said all along, Obamacare belongs to Obama. Obamacare is not Mitt Romney’s plan for Massachussetts, it’s not Bush’s fault. Nor is it the fault of Republicans who fought against it.

Obama got on the horse and put the noose around his own neck on this one. It won’t be Republicans shooing the horse away, as Obama does himself in.