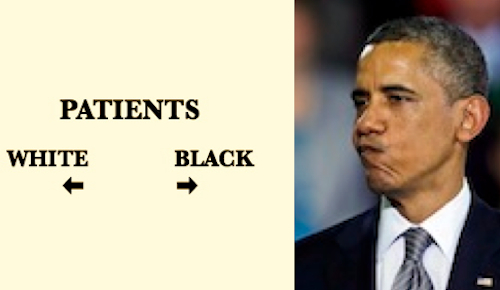 Obamacare might as well have been written by white racist Bull Connor: the program calls for separation by race of doctor and patient!

In other words, black doctors for black people. Sort of a “Separate but Equal” clause. Considering how dumbed-down black students are, I sure don’t want some black Med School grad!

In fact, call me Kevin Chang! I believe I will opt for an Asian doctor.

In a move that proves that Liberals are consumed with race, Obama has included provisions in Obamacare that encourage racial profiling in medicine. The claim is that a doctor of the same ethnicity will care more about you. You’d think that if that were the case, black people would be GONE by now, as most doctors are NOT BLACK.

Can you imagine if [insert Republican president here] had called for a “separate but equal” national health care plan? Yet here is what the very “progressive” Center for American Progress used as the rationale for this nonsense:

“Research suggests that health care providers’ diagnostic and treatment decisions, as well as their feelings about patients, are influenced by patients’ race or ethnicity. Several studies have shown that racial concordance is substantially and positively related to patient satisfaction.”

“There is… evidence that race concordance — defined as shared racial or ethnic identities between clinicians and patients — is related to patient reports of satisfaction, participatory decision making, timeliness of treatment, and trust in the health system.”

But don’t let the facts stop liberals from their experimentation and ultimately their money grab. This separation will lead to diversity training for doctors and nurses working on different ethnicities, specifically teaching how to work on blacks and Latinos.