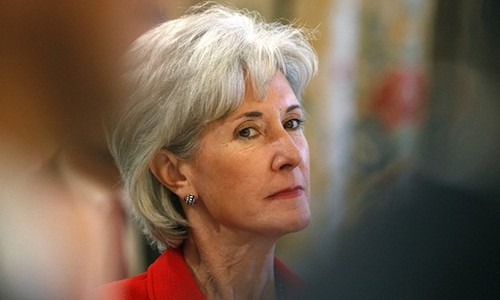 Kathleen Sebelius is about to get “Benghazied”…left behind to fight for her own life.

If form holds for Barack Obama, Sebelius is on her own, and she won’t have two Navy SEALS to help stem the tide of the onslaught that is about to come from the launch of the ill-fated Obamacare website.

When the heat is on, Barack Obama is gone like last week’s pay.

Americans are all too aware of the problems with the website, the main problem being that it doesn’t work. Trying to log on is like playing darts with spaghetti. And on the rare occasion you can log on, the site gives out misleading, if not outright fraudulent information.

And the website woes are just the beginning of ObamaCare’s issues. We have discovered that crony capitalism is at play; and this involves the First {ahem} Lady.

But before we even address the First Lady’s involvement, I’d like to know how CGI, a Canadian IT company gets a “no bid” contract for Obama’s crown jewel of legislation, in a time when American companies are in dire need of work. Eh?

Well that brings us right back to the the First Lady.

Because in order to be an incompetent Canadian IT company who gets a no-bid contract from the U.S. government, you just need to have an executive in the company who was the First Lady’s Home Girl. The Princeton connection.

Add the daughter and son-in-law of Obama’s Chief of Staff, Valerie Jarrett, and you get a $678 million (and counting) non-working ObamaCare website, and taxpayers who are about as happy as a penguin in a microwave.

At least the Obamas are transparent.

Obama’s fraud-dipped fingerprints are all over this pay-for-play deal, and Obama has dropped Sebellius like third-period German. He’s hunkered down in the situation room watching the NBA, occasionally changing the channel to watch Sebelius flip-flopping like a dying fish.

Only the Anointed One gets media protection.

So now Obama’s incompetent white woman must take the fall for Obama’s greatest failure. And Obama knows failure on a grand scale, he just never will own it. That’s because the investment by others in Obama is so large that failure is not an option…even when it occurs. The myriad of big “Obama investors” has rendered the President plenty of scapegoats.

You can measure the leadership capacity of Obama by the success—in his case failures—of the people around him. But what’s disturbing is the number of glaring female failures in Obama’s administration. Obama seems to be some sort of passive-aggressive misogynist who sets women up for failure.

Obama appoints the most inept women he can find, putting them in positions they can’t possibly handle, and they fail royally almost every time.

Janet Napolitano presided over Homeland Security during the Boston Marathon bombing, where supposedly we got intelligence from the Russians well in advance that the tragedy was going to occur. She blew it.

Napolitano was also on watch for the crotch bomber, as well as two “workplace violence” acts in the military, and she is partly responsible for the deaths surrounding Fast and Furious. Obama didn’t step up to save Napolitano, allowing her instead to ride off into the sunset.

Should she run for president, Hillary Clinton will again face the ghosts of Benghazi — the event where four Americans were killed, including an ambassador.

Benghazi sent Hillary scampering into early retirement, as she likely smelled the axle grease on the undercarriage of Obama’s bus. No chance of becoming another “first,” if she stuck around to support America’s spineless black president, only to be abandoned by Obama for political expediency.

Regardless, time will tell if Clinton made what may be her career-limiting-move in her discussion before Congress: she uttered the now famous phrase, “What difference does it make!?” It could make all the difference in 2016.

And what of Lois Lerner, the embattled IRS official who pleaded the 5th, in order to not incriminate herself…or Obama? Dozens of visits by IRS officials to the White House, but nobody knows with whom they met?

In order to avoid any more “confusion,” Lerner has gone into retirement.

Napolitano, Clinton, Lerner — none of these women passed the buck to Obama. Yet Obama has not supported a single one of  three former staffers. Contrast this with Obama’s treatment of incompetent men.

Obama has held on to Eric Holder, actually invoking executive privilege to protect him. He has held on to the most incompetent of Vice Presidents in American history. Geithner practically begged to leave, despite displaying abject incompetence. You starting to get the picture?

Kathleen Sebelius is now flailing in the wind. She had nothing to do with birthing Obamacare.