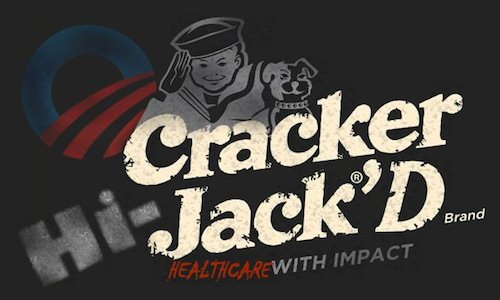 OBAMACARE: A piece of legislation so magical and mysterious that, as Nancy Pelosi so eloquently put it, “we have to pass the bill so that you can find out what’s in it….”

When I was a small boy my mother would bring home one of my favorite snacks — Cracker Jacks! Popcorn and peanuts smothered in gooey caramel-flavored sugar. Sweeter than a molasses-covered ice-cream cone. They were absolutely delicious!

But what was even more special than all that chewy-goodness were those three little words emblazoned on the outside of the box: “Toy Surprise Inside!” Sometimes I’d discover a little toy gun and play cops and robbers with my brothers. Next time I’d find a miniature car I could zoom around the living room. And what’s more, it was free! FREE I TELL YOU!!!

Then one day a terrible, horrible, awful thing happened. Mom brought home a box for me and set it on the coffee table. As usual, I anxiously dumped some of it out on the floor (this was so I could dig around and claim my prize…forget the crunchy popcorn). The only thing in the box besides the popcorn and peanuts was a tiny envelope.

Tossing the envelope aside, I dug deep to the bottom of the box thinking by some horrible twist of fate, someone forgot the prize. Or maybe some Cracker Jack packer STOLE my surprise!

That’s when it happened. The day my innocence was lost. I slowly took the small, crisp square in my hands and read the words on the paper, “Surprise Inside!” Reluctantly, I pulled it open. Inside was a piece of paper with a slit on either end with these instructions;

“To use your pencil topper, just detach the prize and insert a pencil through the slits as shown below.”

This was no toy! I’d been duped! Heck…they’d apparently even duped my mother!!!

It was shouted from the rooftops by the Administration and media organizations. The healthcare-savior had arrived! The Affordable Care Act would give millions coverage they had not been able to afford, and would allow those who didn’t need it to keep their own plans.

Repeatedly and with the fervor and enthusiasm of a Baptist minister, Barack Obama declared:

And MILLIONS of Americans believed him. Believed him to the point that he won reelection in 2012.

Over this past weekend true Obama believers have been stunned with the news from no less than CBS and NBC, all the way to the much-despised Fox News, that they have been lied to. That the silver-tongued savior led them down the primrose path of healthcare redemption. That what they had been buying since 2009 was being delivered to their very own mailboxes in a big-ol’ sack of excrement.

As Obamacare proponents’ cries of “I was all for free healthcare until I knew I was paying for it” ring through the rafters, I can’t help but laugh hard and long.

Yes, I’m sure it will affect my family the same as theirs. But the irony of being a small boy and realizing there was no “free” toy inside, compared with these post-pubescent adolescents just now grasping it for the first time somehow comforts me.

Mostly because I think maybe, just maybe, these toddlers sucking on the thumb of big Government may finally be waking up to the fact it’s time to take their first baby-steps to maturity. Nah.