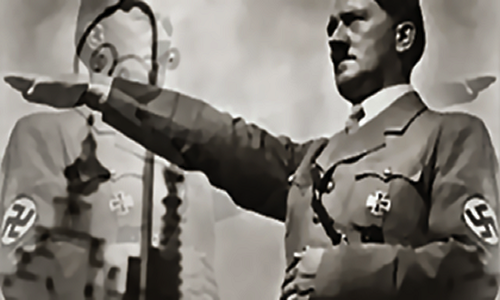 The words, “I have returned from Germany with peace for our time” were spoken by the now infamous Neville Chamberlain on September 30, 1938.

Chamberlain delivered this declaration  as he returned from Germany, the Munich Agreement in hand.

Signed earlier that same day by Germany, France, the United Kingdom and Italy, the Munich Agreement was promoted as a negotiation of peace between the German Government and its neighbors. The Germans were granted control over Czechoslovakian borders in exchange for their promise of peace. The pact is now widely regarded as a simple appeasement to avoid German aggression. Nothing more.

So it is that over the next 7 years, 6 million Jews and more than 5 million non-Jews; more than 11 million human beings were slaughtered at the bequest of the National Socialist leader of the Nazi Party, Adolph Hitler. And the only time he ever pulled a trigger was in the cowardly act of suicide.

Since that time, the world has seen the rise and fall of many Dictators, some with little lasting historical impact, and many tyrants responsible for death tolls exceeding that of Hitler. Under Stalin’s reign, the estimates of those slain are from 20 million to as high as 60 million!

Hitler and Stalin had something in common. They promised their people things which they never intended to deliver. And each case (history being the ever predictable mistress) ended in despotism, misery, poverty and ultimately mass genocide.

“The people must remain ever vigilant against tyrants masquerading as public servants.” – George Washington

The Founders understood a thing or two about human nature. The phrase made famous by John Dalberg-Acton, “Power tends to corrupt, and absolute power corrupts absolutely” was not uttered in vacuity.

Nearly 100 years before Lord Acton’s birth, those who brought life to the Constitution and our Declaration of Independence uttered words every bit as cogent.

James Madison stated, “The truth is that all men having power ought to be mistrusted.”

While John Adams declared that, “There is danger from all men. The only maxim of a free government ought to be to trust no man living with the power to endanger the public liberty.”

And then we have this warning, “Whenever a man has cast a longing eye on offices, a rottenness begins in his conduct.”  Thomas Jefferson, author of The Declaration of Independence.

So, power in and of itself is not the problem, but when men with an already apparent, “rottenness of conduct” obtain power, the results are disastrous.

Humans are given to greed, and under the right conditions the desire to obtain power and subsequently retain control overcome any sense of humanitarianism.

This is why, concerning term limits for Congress, Thomas Jefferson wrote:

“My reason for fixing them in office for a term of years, rather than for life, was that they might have an idea that they were at a certain period to return into the mass of the people and become the governed instead of the governors which might still keep alive that regard to the public good that otherwise they might perhaps be induced by their independence to forget.”

We now have not only Congressional leaders being returned to Washington for decades, but Supreme Court Appointees who serve until death. This kind of political immortality is the very thing our Founders warned would destroy the America they imagined.

You see…the problem with America’s Government is not the Presidency. Oh, we may have had a few men in the White House over these 2 centuries that were anything but altruistic, but with rare exception they have gone in one end of the White House and out the other before the paint dried on the Oval Office.

America’s problem are those individuals with designs on everlasting control — a desire to create a legacy on the backs of law-abiding citizens.

What we have here are mortal, imperfect men susceptible to a malevolent enticement for more power and greater control who need to simply be returned, “into the mass of the people and become the governed instead of the governors.”

And this appeal by Thomas Jefferson needs to be delivered by Americans en masse… Beginning in 2014.