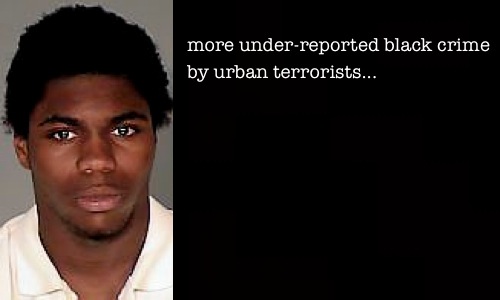 In St. Paul, Minnesota, a woman received a golden lesson on street-smarts after a car full of Black thugs approached her.

According to the criminal complaint, the incident occurred approximately 7:30pm while the woman was standing outside and talking on her iPhone. A car with four black males wearing wigs approached and pretended as if they needed directions.

When she got closer to the vehicle, they pulled her towards the car and snatched her iPhone.

Three other males exited the vehicle and one of them grabbed her hair, pulled her to the sidewalk, pushed her to the ground, and then pulled down her pants. At this point, the woman thought that she was going to be raped.

Instead, the thug decided to dehumanize her in another manner: he urinated on the woman.

She then heard one male say, “Mitch you took that white bitch’s phone,”  before they drove off.

Along with the emotional and mental damage, the woman suffered a cut to her wrist and above her eye.

The police later located the car and learned that it was an unreturned rental. The victim’s iPhone was found in the trunk and her wallet in the center console.  Marijuana was also discovered under a seat in a metal container.

The driver, 19-year-old Miklos Terrell Dates Jr, was identified by the victim through a photo lineup. He stated that the car belonged to his “auntie” and the iPhone belonged to his friend. His accomplices were all juveniles.

He was charged with first-degree aggravated robbery and fifth-degree criminal sexual conduct. Indeed, these charges will bolster his street cred.

In related news, the Department of Justice may investigate whether the victim violated the civil rights of the perpetrator. Attorney General Holder maintains that the perp was entitled to her items because he is Black, and since she didn’t comply in a timely manner, his bladder released.