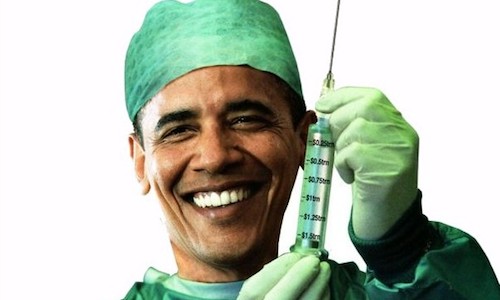 Compare that to only about 100 thousand Obamacare enrollees in the same length of time!

Many more cancellation notices are imminent. But yesterday the Wall Street Journal obtained information regarding the number of people who have signed up for new private health coverage under Obamacare: 40,000 to 50,000 for the federal exchange, and 49,000 for the 12 of 14 state-based exchanges.

Last month the Associated Press published details of an internal Obama administration memo, dated September 5, detailing the White House’s monthly targets as to how many people would sign up for private insurance under Obamacare exchanges.

Through October, the administration estimated 494,620 would sign up. They only got about a fifth of the way toward that lowball estimate.

…somewhere around a 50-to-1 ratio of cancellations to enrollees.

The question now is, will that gap ever close? Because if it doesn’t, at the end of the year, when those 5 million canceled plans expire, we are going to be living in a country where ObamaCare has actually increased the number of America’s uninsured.

The faulty website is not the Administration’s only problem with the millions who have had their plans cancelled. Eventually, the website will be fixed and those who want ObamaCare will be able to get it.

But how many of those 5 million will choose not to re-enroll, out of disgust and a sense of betrayal?

How many won’t be able to afford the Affordable Care Act after realizing sticker shock from the jump in the cost of premiums and deductibles?

Obama is no messiah, but rather a prophet or doom and Lyin’ King nonpareil.

And of course, we must never forget that Obama, who learned his Rules for Radicals well, has always wanted a single payer system: Obamacare was just the red carpet leading to his Socialist health care utopia.

Too bad Obama hasn’t read the Bible, for the only place all tears are wiped away is heaven. The President has instead turned America into a place of wailing and gnashing of teeth.