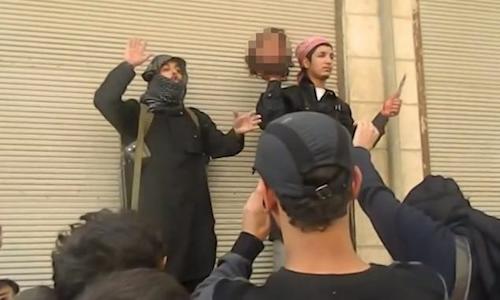 It was bound to happen. Al Qaeda fighters behead one of their own.

This beheading happened in Syria, where anti-government rebels killed a man whom they believed supported Bashar al-Assad, the president of Syria.

They all look alike, and are all named Mohammed.

Al Qaeda about to lose his head: “NO! Don’t kill me; I AM MOHAMMED!”

Al Qaeda about to wrongly behead his fellow combatant: “Shut up INFIDEL…we are all named Muhammed!”

These were the people Obama backed in Syria.

An online video showed a gruesome display of radical fighters holding what appeared to be the victim’s head. The victim was determined to be Mohammed Fares who had been wounded in earlier fighting. Sounds like he was in the wrong uniform.

What’s funny about this is that al Qaeda has an official spokesman who asked for forgiveness for the al Qaeda brothers who beheaded Fares in a statement released online:

“We call on God to accept Mohammed Fares into his Kingdom and to forgive his brothers that sought to rid us of the enemies of God and our enemies,” Omar Al-Qahatani said in Arabic in the ISIS statement.

Here are some ironies.

Al Qaeda beheadings of their own 1, Tea Party 0.