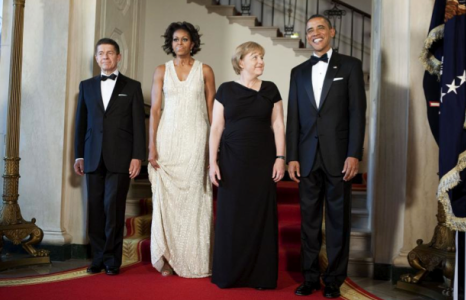 If Americans are honest, they’ll be able to recognize themselves in the picture of Angela Merkel during her 2011 state visit, lovingly staring upward into Barack Obama’s smiling face.

Angela’s naïve body language typifies the way many Americans felt about Barack Obama in 2008, and then again in 2012.  To those who elected him twice, Barack was considered both a friend and an ally.

Much like the American electorate, Dr. Angela Merkel has come to find out – much too late – that Barack Obama is not to be trusted.

In 2011, Chancellor Merkel accepted an invitation from the White House for an official state visit.  She was feted at a state dinner and awarded the Presidential Medal of Freedom, only to find out a few years later that she was wronged by a Barack Obama double-dealing ruse.

At the time of her visit, Chancellor Merkel was deemed worthy of a presidential honor considered the highest civil award of the United States Government for “meritorious contribution to the security or national interests of the United States, to world peace, or to cultural or other significant public or private endeavors.”

Chancellor Merkel came to symbolize the triumph of freedom by becoming the first East German to serve as Chancellor of a united Federal Republic of Germany.

She also made history when she became Germany’s first female Chancellor. A dedicated public servant, Chancellor Merkel has promoted liberty and prosperity in her own country, in Europe, and throughout the world.

The Medal of Freedom was bestowed on Merkel at the State Dinner while the National Symphony played, minstrel James Taylor serenaded. And while guests dined on things like White House Honey Gastrique, Petite Filet, Golden Raisins and Topfen, and German-style Apple Strudel.

In other words, while Angel Merkel was feasting, behind the scenes the National Security Agency was busy subjecting her to police-state tactics.

The Chancellor trusted her endearing colleague, all the while believing that the affinity she and Obama supposedly shared was an affectionate alliance. Boy, was she mistaken.

Little did Merkel know that in addition to the medal and the food “subtly infused with the perennial and annual herbs from the [White House] garden,” she was also being “subtly” bugged.

Which raises the question: How does one award a person for promoting “liberty and prosperity…throughout the world,” while simultaneously monitoring their private conversations?

Sorry to say, but it’s similar to promising to gift gullible American people with liberty, prosperity, and affordable, high-quality healthcare, all the while knowing that the plan would actually deprive them of all three.

Surely Barack Obama would know that Ms. Merkel, who was raised in East Germany, harbored a deep-seated loathing for the type of Stasi-state, “The Lives of Others”-style shadowing to which he was subjecting her and 34 other friendly foreign leaders.

Had Merkel known that someone she considered a fellow world citizen was instead a paranoid megalomaniac, it’s likely that on that balmy June evening, under the tent in the Rose Garden, rather than compliment the hostess on her splendid menu and haute couture, she probably would have gagged on her shaved ham and ginger snaps.

Someone please explain! Why, pray tell, would the president authorize the NSA to wiretap conversations of foreign leaders who consider themselves America’s friends?

Requesting anonymity, a “high-ranking” NSA official told German Sunday newspaper Bild am Sonntag that it was President Obama who “not only did not stop the operation, but he also ordered it to continue.”

The response being bandied about, in a coordinated effort to spin the truth, is that in addition to insurance companies being responsible for millions of Obamacare rollout cancellations, unbeknownst to him the NSA also spied on Barack Obama.

The problem with the latter claim is that to cover his tracks for snooping on everyone who trusted him – not to mention those who did not – star Alinsky student Obama is wily enough to authorize his own surveillance.  Either that, or the man is totally oblivious to the disaster his sub-par leadership is inflicting on both the nation and the world.

And then there were those who, in 2010, thought that Bibi Netanyahu was a bit paranoid himself when he said he thought his phone calls from the White House were being bugged. Seems the Israeli Prime Minister’s suspicions were spot-on.

At present, we come to find out that in addition to Angela’s private “Joachim, please don’t forget to pick up the Wiener schnitzel on the way home” phone calls being listened in on, NSA goons were also physically tailing the German Chancellor.

To subject this woman to police-state reconnaissance reminiscent of what East Germany endured, from the end of WWII until its collapse in 1989, is not only imprudent, it’s abusive.  It instigates cynicism, damages alliances, and fosters worldwide discord – as well it should.

Still, Barack ‘I know nothing!’ Obama continues to deny knowing that the Chancellor was being monitored.

Whether he acknowledges it or not matters little, because in just five short years the 2009 Nobel Peace Prize winner has systematically decimated U.S. relations with nations that formerly considered themselves our closest allies.

And try as he might to refute the German Chancellor’s spying accusations, the Merkel situation has proven to be symptomatic of how the Obama Chicago machine rolls.  More importantly, this incident should serve as a “teachable moment” for all those Americans who also, while crying their eyelashes off, gazed lovingly upwards into the smiling face of a man they truly believed had their best interests at heart.

Now, together with a justifiably “livid” Angela Merkel, millions of Americans are finding out that the man they thought trustworthy is, in truth, a menace poised to destroy all that America and her allies hold near and dear.