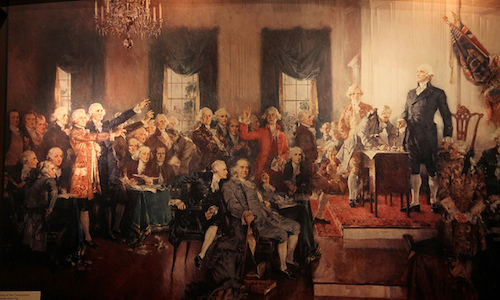 Atheists are obsessed with God — more so than many people of faith.

Atheists are also obsessed with the First Amendment, especially the Establishment Clause.

To many atheists organizations — American Atheists, Freedom from Religion Foundation, and The Military Religious Freedom Foundation — national mottos and statements like “One Nation Under God,” “In God We Trust,” and “So Help Me God” amount to an establishment of religion merely because such words endorse the reality of God.

But endorsement is NOT establishment.

However, the establishment of a religion — the formal organizing, funding, managing, and proscribing statements of faith — is strictly forbidden by the Constitution. And rightfully so.

The Establishment Clause was written in simple and straightforward language. Congress, the legislative bodies of the U.S. House and Senate, is prohibited from passing any laws institutionalizing a national religion. They “shall make no law respecting an establishment of religion.”

Of equal importance to the Establishment Clause is the Free Exercise Clause in the First Amendment.

This Clause is what our fellow citizens who disbelieve in God often forget or ignore. Congress, by force of law, can’t establish a religion. But neither can they, by force of law, “prohibit the free exercise” of religion in the public sphere.

Notwithstanding the Free Exercise Clause, the latest battle by atheists groups is to remove the phrase “so help me God” from the Air Force Academy’s oath of honor.

And American United, with the endorsement and support of other atheists organizations, has already sued the Town of Greece, New York, for allowing public sectarian prayers before council meetings. The Supreme Court will hear oral arguments on November 6, 2013, in Town of Greece v. Galloway.

America has a long history of enlisting chaplains to pray before legislative bodies, the fact that both houses of Congress pay for chaplains who open each legislative day with prayer, and the fact that state legislatures, county commissioner courts, and city councils nationwide often open each day’s business with prayer — to say nothing of the Supreme Court’s 1983 ruling in Marsh v. Chambers.

But Americans United and other atheists activists believe the founding fathers got the First Amendment wrong.

On atheists in particular, the spokesperson for American Atheists, Amanda Knief believes the founders’ view on public prayer, especially before legislative bodies, is unconstitutional.

You read that right: the founders were unconstitutional when it came to asking God’s aid in administering their public trust. Not wrong, not bigoted, not irrational — though they may be all these in the minds of atheists — but unconstitutional.

And by implication so must be the Establishment and Free Exercise Clauses.

In a debate with Robert Jeffress, pastor of First Baptist Church of Dallas, on CNN’s “Faces of Faith,” which aired on November 3, Ms. Knief picked up on a corrected statement by Dr. Jeffress by saying,

Yes [the founding fathers] were unconstitutional. It’s [the First Amendment and the Greece/Galloway case] about everybody getting to have their speech.

We always knew atheists were anti-God — regardless of their obsession with Him. But who knew they were also anti-founding fathers and First Amendment?