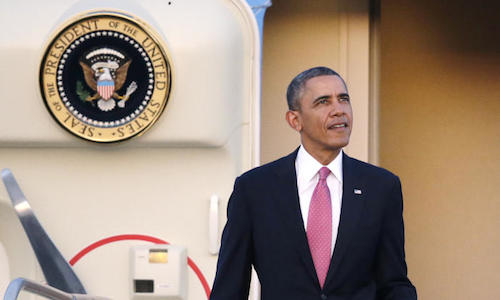 Taking the weekend off from the Obamacare disaster, Barack Obama jetted westward aboard Air Force One to beg for money and push for support for immigration reform in the blue states of Washington and California.

Stopping off in Seattle, attempting to portray himself as reasonable, Obama said that he is “not a particularly ideological person.”

Sorry, but Barack Obama perceiving himself as non-ideological is like Alec Baldwin believing he’s “not a particularly aggressive person” or Lady Gaga swearing that she only wears sensible shoes.

But then again, maybe the president just doesn’t see himself as being all that sociopolitical. It could be that Barack Obama considers being in favor of big government, massive spending, socialized healthcare, unrestricted abortion, illegal invasion, as well as being non-patriotic and secular all tempered points of view.

While manipulating his Seattle supporters, the president blamed national dissatisfaction, otherwise known as his 37% approval rating, on the NSA spying scandal, gun violence, and ongoing upheaval in the Middle East, none of which he assumes any liability for…