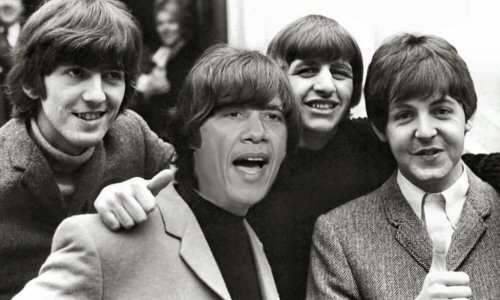 There’s an old saying in the entertainment industry, “Never believe your own press-releases.” Unfortunately for many entertainers, no one bothers to tell them that.

The Beatles come to mind.

The mop-headed boys from Liverpool were adored by millions. Rock & Roll had been made popular in the States by others (Elvis being the King, of course), but The Beatles brought to America’s shores a new and fresh style.

And the public was eating out of their hands. But alas, they surrounded themselves with people who blew sunshine and lollipops up their skirts. So it wasn’t long until they did, in fact, begin to believe their own press-releases.

March 4, 1966 in an interview for the London Evening Standard, John Lennon famously made the statement:

There was a huge negative public reaction after that statement. Beatles albums were piled up and burned and many DJ’s refused to play their music.

At that time in our history people accepted the fact America was founded on Christian principles. Jesus was celebrated, not diminished. And the popularity of these four  talented young men took a large, if temporary hit because of this one Beatle’s comment.

Allow me translate, “America… you need a savior? Here I am!!!“

Like the Beatles, Obama has surrounded himself with those who echo those sentiments in his ear daily. And the lap-dog media do their due diligence by repeating every talking point they receive from the administration. They are the legions of sycophants crying out for more of whatever it is Barack Obama is selling… and they pay the price with their journalistic credibility without so much as batting an eye!

And, so it is that the King of Hope and Change has set himself up as savior. Not only of America but of the entire world.

Let’s reflect on the past 5 years.

The same group of people who complained about the Bush administrations’ thirst for power have conspired together making George W look like a piker. Anything Obama cannot accomplish through legislation, he achieves by Presidential fiat bypassing the consent of the governed (we are a Representative Republic after all).

From the IRS to the NSA to Obamacare he performs full-on cavity searches into our private lives. The Obama Administration has set itself up as master of our collective universe. We can’t eat, sleep, breathe, vote, or think without worrying what Big Brother may learn or even take out of context in order to destroy our lives.

And I, along with many others, will fight for ALL of the rights endowed by our Creator. However, there is one place Obama needs to keep his crooked fingers out of. My personal walk with Christ.

Obama prepares governmental edicts concerning the practice of religion as if he were King George III.

Under Obama, the military codes have been re-written to include Christians as potential terrorists. Under Obama, those with a personal conviction that marriage is between one man and one woman have been publicly ridiculed for our religious belief.

The administration fights Christian organizations tooth and nail to force them to support birth control and abortion. Through Obama’s direct actions, Islam is continually elevated, while Christian beliefs and traditions are scorned. All the while, the Nation of Israel is undermined. Those who Christians believe are special to God, namely the nation of Israel, are seeing their enemies armed to the teeth.

In short, Obama’s arrogance has convinced him HE and his schemes are bigger than Jesus. Greater than Jehovah God!

In comparison, I feel compelled to share a little about Jesus of Nazareth.

Jesus was humble. Jesus was a servant. He sought to be at peace with all men. Jesus sacrificed for those He loved.

“…Christ Jesus, who, though he was in the form of God, did not count equality with God a thing to be grasped, but emptied himself, by taking the form of a servant…” Philippians 2:6-7