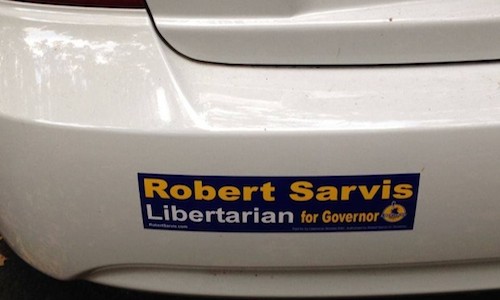 The one thing that could tip the Virginia gubernatorial race to Democrat Terry McAuliffe, and away from Republican Ken Cuccinelli, is a 3rd party spoiler.

Enter Robert Sarvis, the Libertarian Party candidate, though he himself is no libertarian. And the chief supporter of Sarvis? Texas software billionaire Joe Liemandt is the Libertarian Booster PAC’s major benefactor. He’s also a top bundler for President Barack Obama.

Campaign finance records show the Libertarian Booster PAC has made the largest independent contribution to Sarvis’ campaign, helping to pay for professional petition circulators who collected signatures necessary to get Sarvis’ name on Tuesday’s statewide ballot.

So why should a Texan with such extensive ties to big-government Democrats pour money into a Virginia libertarian gubernatorial campaign that has virtually no chance to win?

The Center for Public Integrity offers insight on the power and strategy of PACs: “Super PACs are allowed to collect unlimited contributions from individuals, unions and corporations to produce political advertisements that are not coordinated with any candidate,” it says. “They were made possible in the wake of the U.S. Supreme Court’s Citizens United decision.”

CPI illustrated the potential impact of strategic third-party candidates in the 2012 presidential race. Republican-turned-Libertarian Gary Johnson could potentially peel away some Republican votes in a tight Obama-Romney race. And Virgil Goode, nominated by the conservative Constitution Party in Virginia could have been a key to hurting Romney enough in that swing state to give its electoral votes to Obama.

The Dems will do any and everything to gain and hold power. Sarvis is in no way a true Libertarian, as detailed by Charles C. W. Cooke of National Review:

Looking through his platform, one is left with the impression that what Sarvis really means to say is that he is a social liberal. He is in favor of gay marriage, is (radically) pro-choice, and supports the legalization of marijuana. In this regard, he stands in stark contrast to the Republican candidate, Ken Cuccinelli, who is campaigning for a state marriage amendment, is staunchly pro-life, and, although critical of the War on Drugs and of the current sentencing rules, seems to be broadly against the legalization of pot.

The question, then, for anyone interested in taxonomy, is, Do Sarvis’s social positions make him a “libertarian” in any meaningful way? In my view they do not. Whatever America’s media class would have you believe, social liberalism does not equal libertarianism — and it never has.

Social liberalism equals social liberalism. Indeed, even if you accept that “pro-choice” and “libertarian” are consistent bedfellows, which I absolutely do not, the social positions held by Sarvis are really just standard progressive fare, held also by millions of Americans who wouldn’t dream of cutting taxes, expanding gun rights, or rejecting a Medicaid expansion. (Note that Sarvis wants the state to recognize gay marriages and not to get out of marriage completely. His is the progressive preference.)

This 3rd party ploy should not be unexpected. Ken Cuccinelli most likely is not surprised.

Let’s hope Republicans, Libertarians, and Independents are not fooled by the ruse. Democrat Terry McAuliffe would be one more Obama lackey wreaking devastation on the Commonwealth of Virginia.