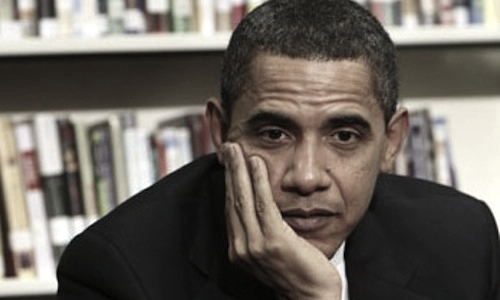 I hate to sound cynical, but I don’t believe anything is real about Obama.

From his trumped up life as the son of a Harvard-educated Kenyan goat herder, to his work on the mean streets of Chicago: it’s all a farce. Obama is a figment of Liberal imagination, and no conspiracy theories are needed.

He was raised and influenced by communists, and I have no problem with that. He should just OWN IT!

Despite a lot of education, the President is not smart. He routinely showcases his ignorance, the latest being the implementation of Obamacare. Day 1 garnered SIX enrollees!

This is the plan that Obama said Americans “wanted…needed…got-ta, got-ta, got-ta have it” and he gets SIX people signed up.

Website woes notwithstanding, he could have saved $678 million, by just going to the bus station and signing up vagrants. You don’t need a jury deliberation to tell you that Obama is a first-class moron of the highest order. He is the champion of grandiose ideas that have no chance of success.

Next, despite being a “5” on the blackness scale, Obama has almost no connection to black culture.

The lie that is Obama’s LIFE is why he must closely orchestrate things. It’s the only way to keep the facade of Barack Obama working. It’s also why Obama won’t allow the “regular” photographers to take real-life photos of him, but instead he stages his photos.

The recent fainting pregnant woman incident was so over the top that people went back to review old footage of Obama gatherings. We posted a montage of “fainters.” It’s uncanny how many people miraculously faint, as Obama directs the action, even handing the person(s) his own water bottle from under the podium. Unholy water, I’ve deemed it.

When the cloak is removed from Obama’s veil of secrecy, Leftist America will see what we Conservatives have known about Obama for some time.

Obama ultimately will damage Liberalism and the Democrats. We just need to keep the pressure on and wait him out.