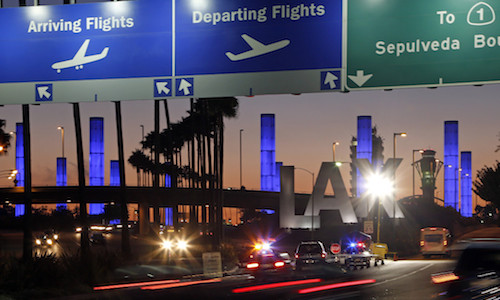 When government employees get shot, guess what those Feds request for protection?

If you guessed, “More COPS,” then you are just being silly. Because if you’d been shot at, you would request what you really need…GUNS!

In the aftermath of the shooting incident at Los Angeles International Airport, the American Federation of Government Employees, the labor union that represents 45,000 federal transportation security officers, on Monday urged the Department of Homeland Security’s new secretary and President Barack Obama to create special units of armed TSA security officers with police training and arrest authority while on duty at the nation’s airports.

The TSA is presently unarmed, a rule established when the TSA was formed right after 9/11. However, in the event of the tragedy at LAX, the TSA wants guns.

There are plenty of cops at airports, cops able to respond faster than they could in almost any neighborhood, but the best Liberal white neighborhoods. However fast that response time it, the TSA is not impressed. And rightfully so, as it didn’t save one TSA agent from losing his life.

I’m torn on this one, since the TSA is already pretty mean and heavy-handed. I can only bet that these “wannabe” Gestapos (not all of them are Gestapo!) will only get more forceful in their public molestations.

That said, I do understand the desire to have the best protection available.

The Left will have a difficult time reconciling giving TSA guns, when they so desperately want to take guns away from private citizens.