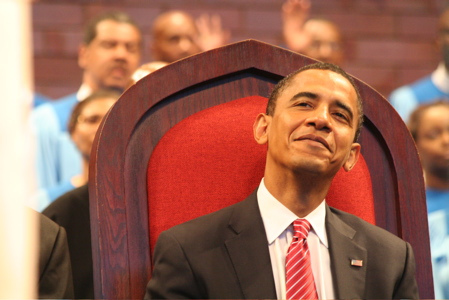 Before committing the blasphemous and daring act of openly criticizing Dear Leader, it is obligatory that I first purify my spirit by reciting Dear Leader’s prayer.

That way, the Black community doesn’t condemn my soul for placing critical thinking over Black solidarity. It’s common knowledge that Blacks who criticize Dear Leader are considered “sell-outs” while Whites are labeled “racists.”

Even the Congressional Black Carcass (oops) Caucus knows that Dear Leader is untouchable. Congresswoman Maxine Waters once confessed to a Detroit crowd,

In short, Dear Leader could authorize drone strikes in the hood and Blacks would accept it without question.

Herman Cain, on the other hand, isn’t even allowed to deliver pizzas there without being questioned.

Anyway, without further ado, in this manner I pray:

Our Father who art in the White House, hallowed be thy name. Thy Constitution-less Kingdom come, thy will be done, in America as it is in the hood. Give us this day, our daily handouts and forgive our criminality, although we won’t forgive the White man for criminalizing us. And lead us not into self-sufficiency, but deliver us from patriotism. For thine is the Constitution-less kingdom, and the power, and the glory forever and ever and ever and ever.

Wow, after saying Dear Leader’s prayer, I now feel Blacker than ever, and I’m suddenly having second thoughts about criticizing him. Maybe I should just shut up and embrace today’s rationing of “Hope and Change.” Besides, Dear Leader has a strong disdain for dissenters.

In fact, according to the book Double Down: Game Change 2012:

“Obama had little patience for the ‘professional left,’ and vanishingly close to zero for what one of his senior African American aides, Michael Strautmanis, referred to as ‘professional blacks’ (as opposed to black professionals).”

The disobedient “professional blacks” need to throw themselves at Dear Leader’s feet and beg for mercy. As evidenced by the (more than) 90% Black turnout for him in 2008 and 2012, he’s our savior.

Therefore, in 2016, we Blacks should focus on raising that ninety percent to one hundred percent. Can we do it? Of course! We simply need to invoke Dear Leader’s original campaign slogan, “Yes, we can!”

Granted, the presidency is constitutionally limited to two terms. But that antiquated piece of tissue, also known as the Constitution, has yet to constrain Dear Leader. So, again, “Yes we can!”

Despite having his only begotten “if i had a son” martyred by America’s racism, Dear Leader still showed his socialistic love for the country by instituting his ‘Holy Grail,’  commonly known as Obamacare.

My gripe (and I use that term with humility) with Dear Leader is that his repeated assurance of “if you like your current insurance, you keep that insurance” has turned out to be an outright lie. Dear Leader and his disciples knew that the law would actually cause many to lose insurance.

Black media sites such as Thegrio.com (MSNBC’s product) and Theroot.com (Washington Post’s product), are amongst his many liberal scribes that are characteristically downplaying the lie. Essentially, they’re arguing that a few eggs had to be cracked to make the Obamacare omelet.

The protectionism isn’t surprising since their primary duty is to hide the fact that Dear Leader has no clothes.

Even so, outside of the palace walls, his subjects weren’t granted Obamacare waivers like his cronies. As a result, millions of cracked eggs are appearing in real time and very few omelets.

He reached out to those millions who were abandoned by their insurers and simply declared, “I am sorry.”  Although his disingenuous apology seemed to satisfy Black media, it adversely affected me.

Noticeably, he didn’t apologize to the families (such as mine) whose insurance premiums increased by several hundred percent, even though his website stated that a typical family would save up to $2,500 annually. Adding insult to injury, my family (like many others) doesn’t qualify for any ‘gap closing’ subsidy.

“For those who have insurance now, nothing will change under the Obama plan – except that you will pay less. Obama’s plan will save a typical family up to $2,500 on premiums by bringing the health care system into the 21st century: cutting waste, improving technology, expanding coverage to all Americans, and paying for some high-cost cases.”

Will my creditors understand that my non-payment is due to my bloated premium? Would an “I am sorry” gesture suffice?

No, it wouldn’t! That is why Dear Leader can keep his apology — especially since I couldn’t keep my insurance premium and others their basic insurance.

Nevertheless, while Dear Leader is apologizing, please apologize for weaponizing the IRS, the Benghazi failure, Fast and Furious, and other scandals.

Oh wait, I think that I’ve said too much. I had better recite Dear Leader’s prayer again.