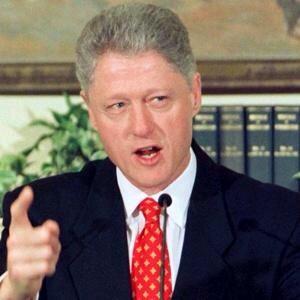 If ever there was a guy who really shouldn’t have anything to say about “commitment,”serial philanderer Bill Clinton is that guy.

Clinton talking about commitment is sort of like a stripper lecturing on modesty, an alcoholic sharing the many merits of  teetotalism, or Billy Rae Cyrus and Dina Lohan giving a seminar on how to raise wholesome daughters.

Yet, behaving like the full-fledged liberal hypocrite he is, Slick Willy, without even a modicum of  hesitation, has taken to the interview circuit to lecture Barack Obama about keeping his commitments.

Seems Mr. Clinton is of the opinion that when a person makes a pledge, they should honor that pledge, except, of course, if the obligation happens to be the matrimonial kind. Which in Bill Clinton’s case obviously doesn’t count.

Attempting to bring clarity to the chaos in a recent interview with Carlos Watson of Ozy Media, preaching the Gospel of “Your word is your bond,” Mr. Clinton, who allegedly supports Obamacare, actually uttered the following:

“So I personally believe, even if it takes a change to the law, the president should honor the commitment the federal government made to those people and let them keep what they got.”

So now Barack Obama, who wouldn’t know a commitment if it was a falling Styrofoam Greek column and it hit him on the head, is being lectured about commitment by the man whose commitment to his wife has been fodder for late-night TV comedians for decades?

Sorry, but if preaching is in order, maybe someone should remind Bill Clinton of what Jesus said in Luke 16:10:

That’s why Bill Clinton, who has repeatedly proven he cannot be trusted with the “little,” has no right to be lecturing anyone, even a lying deceiver like Barack Obama, about being on the up-and-up with the “much.”

Why is this relevant?

Because the man who lied to the entire country and has been publicly unfaithful in his marriage, both of which he would probably consider small potatoes compared to what Obama is currently being criticized for, suddenly feels qualified to counsel the President to keep his word to 300 million people.

In the final analysis, either these people are oblivious to their hypocrisy, in complete denial, or so arrogant they’re convinced that the fact that what they say bears absolutely no resemblance to what they do is nobody’s business.