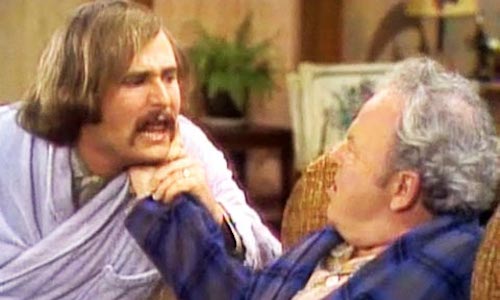 In the 70’s the civil-rights movement was still in full swing. It was a time when attitudes were changing. America was waking up to the fact things would never be the same again.

Anyone over 40 probably remembers the show, “All in the Family”. Produced by noted liberal, Norman Lear, the series showcased the over-exaggerated, racist views of Archie Bunker and his dopey, post-hippie son-in-law Michael Stivic (lovingly referred to by Archie as “Meathead”).

It was easy to laugh at both characters because, in part, they embodied the struggle that was going on in America. But also because they were caricatures of people we all knew.

Since that time, America has grown up. Contrary to media portrayal, most of us have left those stereotypical views behind. Most of us have embraced reality.

Over the years, the man who played Michael Stivic has been an outspoken Liberal. Producing Hollywood hits and campaigning for liberal causes has kept him busy. And, to his delight, those things have also separated him from the role that defined him.

Well, Rob. I’m afraid you’ve earned the title once again. But this time in real life.

In an interview with Bill Maher, Maher was discussing how Conservatives “have moved way over there. So now the middle isn’t the middle anymore”. Taking the bait, Reiner didn’t disappoint. “Obama right now… is right around where Reagan was, right around where Nixon was…he’s no more left than those Republicans.” Reiner opined.

So, let me get this straight…

Reagan – “We cannot diminish the value of one category of human life — the unborn — without diminishing the value of all human life.”
Obama – A strong proponent of partial birth abortion (even many staunch liberals oppose it).

Reagan – “Simple fairness dictates that government must not raise taxes on families struggling to pay their bills.”
Obama – Never met a tax he didn’t hike

Reagan – “A strong American economy is essential to the well-being and security of our friends and allies.”
Obama – Has seemingly done everything within his power to destroy the economy

Reagan – “…America’s best days are yet to come. Our proudest moments are yet to be. Our most glorious achievements are just ahead.”
Obama – The US is no longer in a position to “meet the rest of the world economically on our terms”.

Barack Obama has not only diminished conservatism, but has struck at the very heart of it. His administration has attacked Christianity at every level. He has worked in front of the camera and behind the scenes to shame Christians into the closet while drawing immorality into the light.

So, when you laughingly compare Barack Obama to Ronald Reagan, you earn the name that brought you to fame in the first place.

Let it forever be said that Rob Reiner’s name shall be “Meathead”.