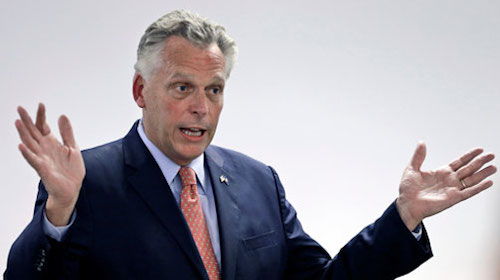 Terry McAuliffe, Democrat scoundrel, finally got the brass ring and is the newly elected governor of Virginia.

His first act as governor? Protect gays from job discrimination.

Democrats won’t have protecting gays on the job as a battle cry, because soon there won’t be any JOBS! I wonder when Governor McAuliffe plans on addressing that.

Next, McAuliffe pledges to only take gifts of $100, that in response to the criticism from his former competitor, Ken Cuccinelli, after accepting an $18,000 gift. How magnanimous of McAuliff, who likely just plans to get a bundler to get 1000 people at a party to donate, say $100 each.

Lord knows, Democrats are not rule-breakers when it comes to illegal funding, personal or campaign.

For those saying that asking if a politician is straight or gay is “none of your business,” I beg to differ. It seems that whether one is gay or straight is all that is on the minds of Liberal politicians. Business is no longer about making products, but promoting the [insert stupid Liberal cause here] agenda.

If Liberals spent a fraction of the time trying to HELP entrepreneurs as they do regulating them, America would be 80 percent of the world’s GDP.

America is not discriminatory against gays. Gays are doing GREAT in America, far better than their straight counterparts. But let’s not let the truth of the matter interfere with the gay agenda.

I used to not care about a person’s sexuality. But it seems they were sticking their genitalia in my face on a routine basis, despite what the Left says about their “tea bagging” habits.

I am beginning to dislike Leftist gays and their enablers.