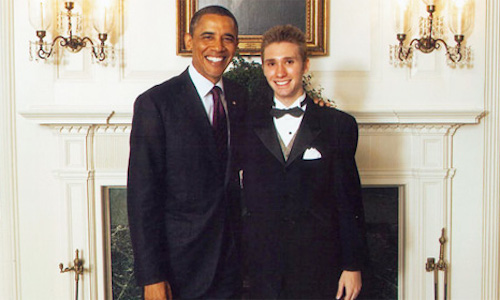 Why not honor a gay criminal? Obama had already honored a “NOT Gay” criminal, when he awarded Bill Clinton the Medal of Freedom.

An openly homosexual teenager, who was given a position as an “adviser” to Phoenix Mayor Greg Stanton and honored by President Barack Obama at a White House “gay pride” dinner, has been indicted on more than a dozen counts of sexual misconduct with a minor under the age of 15.

Caleb Laieski, now 18, was 17 at the time of the alleged abuse. His alleged victim, a close friend he met on TrevorSpace (a social media site for children and young adults aged 13-24 who have an interest in homosexuality), was only 14 at the time. The younger boy said the sex was consensual, but that he felt “pressured” to participate. However, Arizona law says no one younger than 15 is capable of giving consent.

The Left try to tell us that a person’s sexual preferences are none of our business, and that it has nothing to do with a politician’s ability to lead.

Yet it appears that the gay agenda is always on the mind of Obama. While Obama promotes the gay agenda, he proves almost daily that he has no intention of promoting the Christian agenda, though the President claims to be a Christian.

Based on legislation, there is far more evidence that Obama is likely gay, than proof he is a Christian. He refused to say “under God” in his recreation of the Gettysburg Address, and I can’t remember the last time Obama legislatively (or anecdotally, for that matter) promoted Christianity.

I’m appalled that all it takes to get a medal from this “president” is to be a punk…and even better a GAY punk!