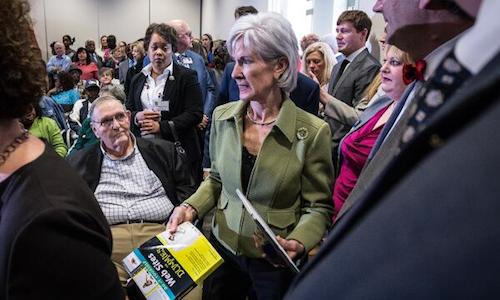 Apparently people in the government can’t take a joke!

American citizens are used to jokes, as we have watched the Obama administration trip over themselves routinely.

One patriot decided to flip the script and joke with Sebellius about ObamaCare’s website, presenting her with the book “Web Sites for Dummies.”

Aside: Dummies held a press conference shortly after this incident, demanding an apology for being compared to anybody in the Obama administration. Spokesperson for Dummies commented, “Making a comparison of Dummies to Obama people is about as low as one can go. Dummies are far smarter than Obama zombies.”

It turns out, Sebellius didn’t take the joke too well, as the look on her face in the photo indicates.

You’d think that Obama’s minions would have learned to laugh at themselves by now, given their leader. Soon the Left will be forced to admit that the man they called, “the smartest president ever” is just the typical Leftist moron, with a padded his resume.

I rather enjoy the exposure of Obama as a fraud and a buffoon, and the subsequent attempt to cover up those facts. Stay tuned…