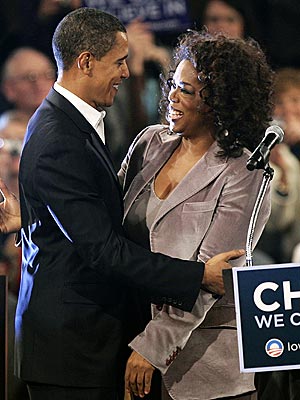 “There’s a level of disrespect for the office that occurs. And that occurs in some cases and maybe even many cases because he’s African American.”

No, Oprah. In all sincerity I disrespect Obama for the same reason I disrespect you… because he is not worthy of respect.

Hard as it is to believe, in some circles of this great and glorious land we call “America,” there are people who think for themselves. These are those who don’t wait for some overpaid, egocentric talk-show host to tell them what to believe, what to think, or how to vote. They are the countless millions who expect others to take responsibility for themselves and their own families.

You see, we grew up in a time when there was no Oprah show to tell us we were poor, downtrodden, mistreated and abused.

Instead, we had to shoulder both trial and tragedy with no one to blame for our state but the man in the mirror. If we succeeded or if we failed, it was because of something we had done, not the color of our skin. There have been many in America of every race who were born into truly poor and terribly disadvantaged homes, yet succeeded wildly. Take Barack Obama (please).

I don’t believe you understand the quandary you’ve placed yourself in!

On the one hand, you couldn’t help but defend “Barack’s” African-American heritage from the evil white man. After all, no white person could actually be judging the man based upon his actions. Whites are inherently racist, after all.

On the other hand, “Barry” is responsible for one of the largest economic declines for minorities in US history. How could you possibly allow his Caucasian side to get away with leading African-Americans into such a horrible state of affairs?

It appears you want to both have your cake and eat it too (and eat it… and eat it…).

I want to thank you for reminding us all of our apparent racism. I hope you’ll take the time to remind Barry of his.