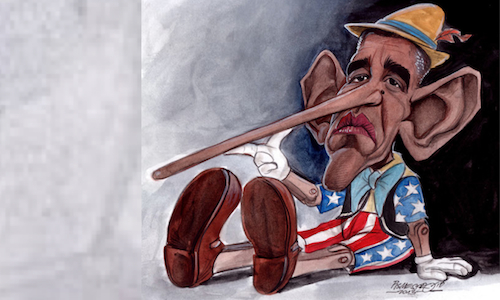 Once upon a time, the Prince of Hopenchange stomped angrily around the White Castle. He jumped on the furniture, and kicked his golf bag so hard he snapped the shaft of his favorite putter.

Why was he so filled with rage?

Because, for the first time ever, he had been caught in his gollywhomper lies.

Being nailed as a “mis-spoken teller of incorrect truth” had caused the Prince of Hopenchange’s popularity and job approval ratings to plummet. Even his media lap dogs had turned against him. Instead of being cheered as the “Chosen One,” he was mocked and called “The Lying King,” and “President Pinocchio.”

All those years of campaigning for his healthcare plan, traveling hither and yon, toughing it out in five-star golf resorts, accompanied by teleprompters, valets, drama coaches, and food tasters . . . all that effort had been expended for nothing. His adoring public had lost that lovin’ feeling.

How did this happen? Increasing numbers of citizens learned what was in the 2,000+ pages of his healthcare law…