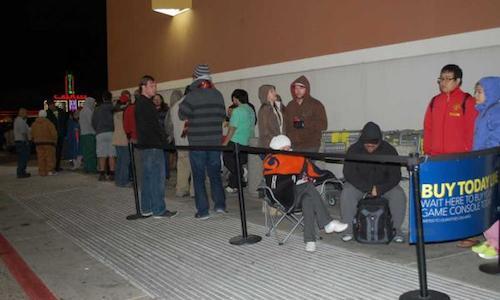 3. Have a good distribution plan

Part I of “Have a good distribution plan” is have a working website.

This is the information age, is it not? The candidate-turned-president who planted messages inside of video games during the election cycle, was unable to get a website operational…in THREE years!

I dare Team Reckless to visit Sony’s website and try to bring it down with product orders. Sony is more than prepared to deal with a run on orders or those dastardly requests for more information.

Obama can’t take orders, or even back-orders, breaking Capitalism Rule 1: Be able to SELL your product (term used loosely with respect to ObamaCare).

$678 million (and counting) spent on a website that can’t even dispense information.

Part II of “Have a good distribution plan” is work with distributors to make sure you have a coordinated sales roll-out.

Sony made sure there was plenty of product to meet the REAL demand. They announced their roll-out strategy to the public and there were lines of people at various outlets waiting for the PlayStation 4. That is how capitalist define success.

Part III of “Have a good distribution plan” is timing.

Sony planned their rollout at Christmas. The timing couldn’t be better, as long as Sony accomplished the other two parts of the distribution plan.

Contrast these features with those of ObamaCare.

Despite knowing that nobody wanted ObamaCare, Obama launched. The Republicans tried to get him to delay the launch or cancel it altogether, but he would have none of that [Ted Cruz sanity]. There was no need to rush ObamaCare, except Obama’s massive ego.

Partners in the website warned of impending doom, and recommended a delay in the rollout. However, Obama’s team disregarded the partner’s foreboding.

Where was Obama, the leader of the free world, who should have been anxiously awaiting the birth of his new baby? He was at the strip club! Isn’t that what deadbeat black fathers do when their children are born.

Ok, “for realz” Obama was watching CNN to get an update on whether the baby had all its fingers and toes. Obama’s limo driver was texting the hospital for updates, in case he might need to call a short press conference.

Obama, nor any of his crack (head) staff have a clue about how to manage a supply-chain. Which is a great lead-in for “Avoid a recall.”

Kevin Jackson - October 24, 2021
Surprise. The Wuflu vaccines are less effective than placebos. Don't believe me, check out what the FDA stated per Grabien: Buried 23 pages into the FDA’s approval...