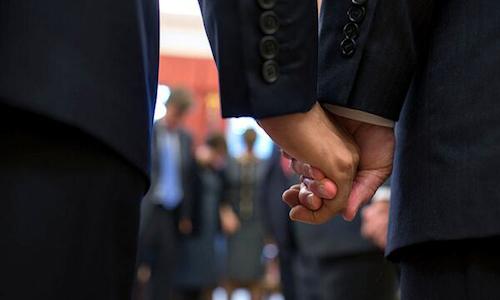 Some may find the handholding heartwarming, others may find it disturbing, and still others might find it downright weird!

The oddity in question is the picture, tweeted out by White House reporter Pete Souza, featuring the abortion-supporting Roman Catholic Vice President Joe Biden and Barack Obama, the crucifix-covering Commander-in-Chief, grasping each other’s hand in prayer.

The president and his main squeeze … er, I mean main sidekick, Joe Robinette Biden, Jr., gathered together with other faith leaders to discuss how to go about foisting thirty million gate-crashing interlopers on the American people.

At the end of the meeting, Mr. Biden and Mr. Obama joined in circle time to beseech the Lord (whose name Obama chose to delete from his snippet of the video for 150th anniversary of the Gettysburg Address on YouTube).

The heartwarming moment took place while asking an unnamed higher power for blessings and direction on how to go about finding a way to allow criminals who broke the law to remain in America.

Marion Robinson, Mr. Obama’s mother-in-law, who allegedly is a woman of faith herself, was not in attendance…