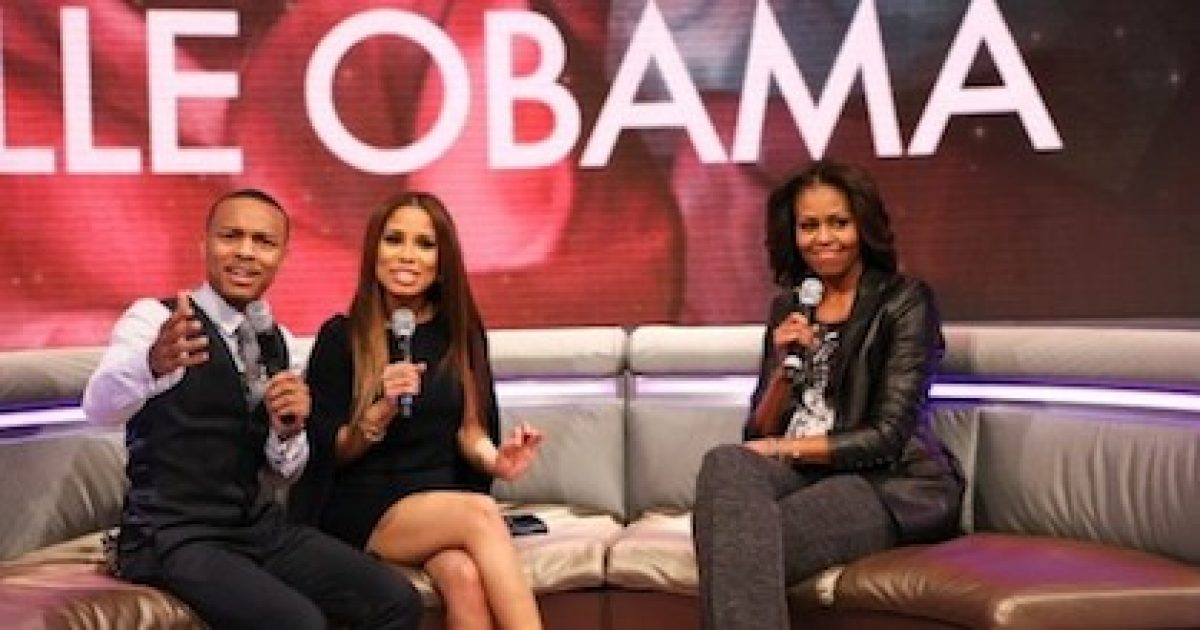 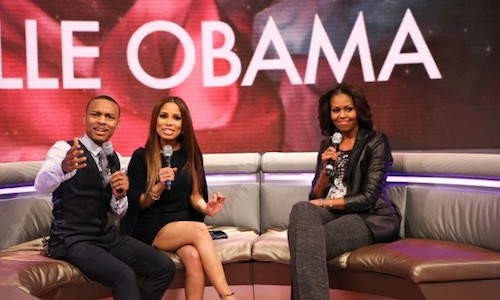 After being introduced as the “personification of grace and beauty,” writer/lawyer/first lady Mrs. Obama made a grand entrance in biker leathers as a screeching Beyoncé filled the screen behind her, jumping around to “Move Your Body.”

After informing her hosts that the Beyoncé video was her music and that on the day the video was taped there were “flash mobs across the world,” Mrs. Obama spent a goodly amount of time speaking about her youth, her aspirations, and her husband Barry’s unimpeachable swag.

As part of the interview, the first lady was shown three extremely unattractive photographs of herself and was then asked, “What would you tell that girl?”

For the first picture, Michelle shifted into her predictable ‘I was afraid I wasn’t smart or bright enough’ routine.  She followed that up with the “Failure is the key to success” bit, which is something her husband knows a thing or two about.

For the second photo, the FLOTUS told the BET audience that despite their lack of confidence, one day even they could be president or first lady.

The third and final picture was Michelle and her senior prom date, which inspired her to share ad nauseam her ‘we didn’t have much money, mom sewed the dress with the slit, I rode the bus three hours to school’ blather.

The girl in the picture also revealed that by the time the senior prom rolled around she was breathing a sigh of relief, because despite school counselors telling her that she wasn’t Princeton material and after admitting that she stunk in math and science, it turns out Princeton accepted her anyway.

Leaving all the high falutin’ Princeton/Harvard/lawyer conversation behind, Michelle “unauthorized to practice law” Obama busted out her best gangsta’ lingo and said that for agreeing to appear on the BET show, she was getting “street cred’ at home” with her daughters.

The FLOTUS also admitted, “[m]y husband has got swag. He has got a good voice.”  Michelle’s “got swag” revelations were met with cheers from the audience and questions from the hosts about the president’s impromptu Apollo Theater rendition of Al Green’s “Let’s Stay Together,” to which Michelle replied: 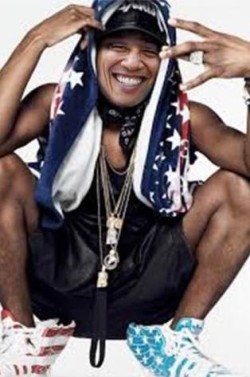 Wait! Forget the “Failure is the key to success” and riding the city bus stuff.  Didn’t Obama just skip the 150th Anniversary Gettysburg Address ceremony because he was working nonstop on that notorious “website?” Now it’s revealed that while he’s in “free fall,” Obama spends time singing in the john.

What Michelle didn’t disclose was when hubby vocalizes in the commode, whether or not he wears a bandana under a sideways baseball cap.  Nor did she say if his pants hang below his butt and show his boxer shorts.

Sure, Obama has swag, but does his toilet attire include a gaudy gold chain and pinky ring, alligator shoes, and a grill like the one Lady Gaga wore to the YouTube Video Awards?

Either way, Obama’s approval rating is still 37% and sagging.

So before all is lost, maybe Michelle should use some of  her “street cred’” to insist our swaggering president up the swag quotient by spending even more time singing in the bathroom.