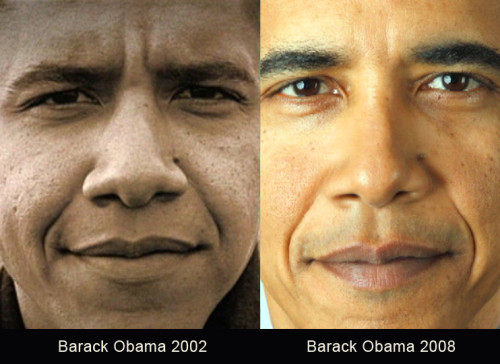 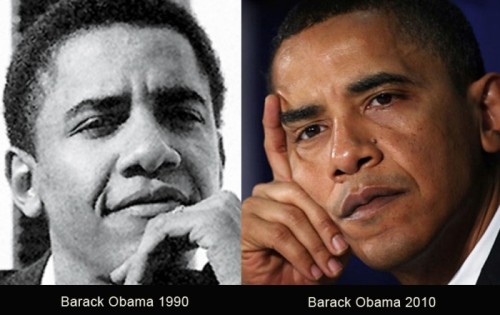 Barack Obama is half-white, but he once had a black nose.

THEN he decided that he needed a white nose, and got a nose job. Oh you can tell, though it was a good job, likely gradual and by a good surgeon. But make no mistake about it, Barack Obama bought his white man’s nose, and it wasn’t to model.

It seems that Obama knows when to play white, and a black man’s nose would not work. Obama needed a nose to match his “no Negro dialect,” in order to be acceptable to Liberal whites. So Barack Obama the blackest president in American history opted for what he believes to be a “new and improved” white nose.

Barack Obama cut off his nose NOT to spite his face, but to improve his chances of success.

The “whitification” of Obama should offend black people. For most of Obama’s life, he talks white, except when he’s around black people — when he gets “ethnic.”

No surprise that Obama panders to black audiences, then goes back to his very white world of golf and lavish vacations. I wouldn’t be surprised to learn that the inside of Air Force One is wallpapered with pictures of blacks and the word “Sucker” in patterns.

Nevertheless, black Liberals won’t fault Obama for his rhinoplasty, and the obviousness of Obama fitting in a white world with his white nose. If that’s what Obama needed to get ahead, which is to abandon his “blackness,” then for ignorant black Liberals, so be it.

Obama is truly an amazing study in politics. If he were a few shades lighter or darker, blacks would not have supported him. He would have either been too white or too black.

Obama was the perfect color to walk the line, where ignorant blacks would vote for him based on his color, and guilty white people accepted him, as long as he had “no Negro dialect”…and a white man’s nose.