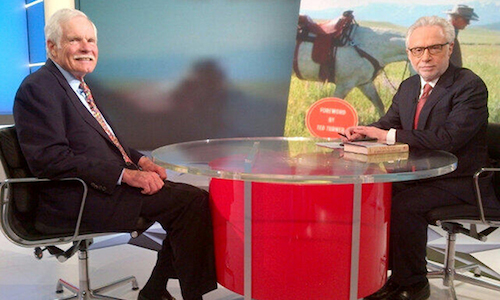 Like most Liberals, Ted Turner is a slow learner. What the majority of Conservatives accept about God by age 10, only took Turner 70+ years: the avowed atheist now is seeking God.

We Christians warned the idiotic Left that there are no atheists in foxholes. Ted Turner is 75 years into his miserable life, and now finds himself staring into the abyss.

I know what you’re thinking: “Kevin, Turner was a billionaire, how could he be unhappy?”

Here is an excerpt from a CNN article:

What will matter most about Ted Turner’s life story when they roll the final credits?

That he started the first 24-hour news network? Built a fortune once worth $10 billion? Was Time magazine’s “Man of the Year”? Received a star on Hollywood’s Walk of Fame? Made The New York Times best-seller list?

Maybe it was that time he raced a sailboat faster than anyone else. Or the year his baseball team won the World Series. Impressed yet? Did you know he had a president for a fishing buddy and won the heart of a movie star?

He even helped bring back an American icon, the buffalo, from the threat of extinction. Always the entrepreneur, he saved bison by convincing people to eat them — at his 44 Ted’s Montana Grill restaurants, of course.

Even considering all his accomplishments and feats of derring-do, Ted Turner is only human. And so, with three-quarters of a century in his rear-view mirror, he’s also thinking about the things ordinary people think about as the sun goes down.

You can be a billionaire or a bum, win sailing’s biggest prize or swab decks, own a television network or have trouble paying the cable bill: By the final curtain, life boils down to a few simple things.

Did I make my Mama and Daddy proud?

Will anybody remember me?

Do I get into heaven?

Ted Turner at 75 has figured out that it doesn’t matter what you do, but it does matters who you are. Unlike God-fearing, Bible-thumping Conservatives who do good deeds because it’s who we are, Turner has done things to fill that void he has been missing. Turner saved the buffalo, because he was really trying to save himself.

I’m happy that Turner has had an epiphany, that he realizes he is meaningless in the scheme of things. That is the first step to growth.

From a political point of view, I suggest we begin winning over these Leftists a bit sooner.