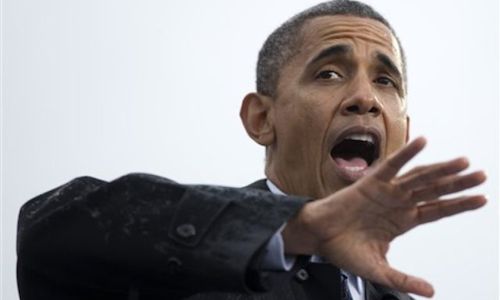 Barack Hussein Obama presides as President over the greatest and most powerful nation in world History. And he wants to see it destroyed.

It seems almost beyond understanding the way America has moved from one terrible crisis to another since Obama was elected President. Syria, Benghazi, Obamacare, the national debt, the economy, racial unrest…one by one calamities unfold. There’s barely time to breathe between news stories.

Now, just a month into the debacle known as the Affordable Care Act the attack continues.

The ghost of the living (Al Gore) has reared its ugly head to take yet another swipe at America’s pocketbook.

That’s right, my friends. Global warming is alive and well in the Obama White House.

“President Obama issued an executive order Friday directing a government-wide effort to boost preparation in states and local communities for the impact of global warming.”

Time and again over the past 20 years we’ve been warned that the earth is coming to an end. Seas would boil, Polar icecaps would melt and California would slide into the sea (that was the upside of the warning).

Time and again the claims have not only been proven false, the data itself has been verifiably contrived. Yet Barack Obama, king of all things true (see “You can keep your doctor”), is trumping up yet another crisis before the paint dries on healthcare.gov.

Obama: the man who said with fondness that our energy prices would “necessarily skyrocket.” He’s the guy working to bring down the coal industry which supplies over 40% of America’s energy.

And now the President is embarking on yet another journey to deplete our financial resources. And another will follow… and another until America is not only bankrupt, but is the laughingstock of the world.

It would be pointless to spend much time on the global warming issue because at this point it’s irrelevant: just another nail in the coffin, placed there by Progressives such as Obama.

Many have tried to imply that Barack Obama was an unknown quantity. They say there was little known about the man.

His mindset, his attitudes and his disdain for America were known before he ever took office. The media and the establishment Republicans were complicit in the cover up. Yes, even his “opponent” Senator John McCain refused to speak ill of the man.

But the proof of Obama’s radical ideologies was there. It was all-too available for those with eyes to see.

We can continue complaining that the country is going to hell in a hand basket while doing nothing to change it. Or we can rise up in such great enough numbers that Washington has no choice but to listen. I personally believe finding enough conservatives willing to make their voice known would be a major miracle.

But I’m a firm believer in miracles.

In closing, I believe a quote from our esteemed leader is in order.