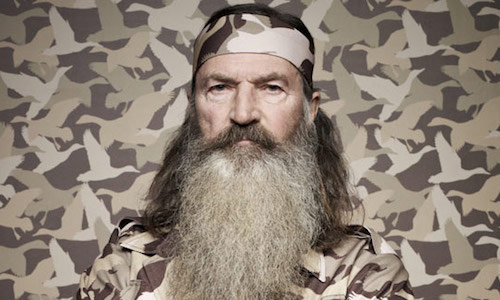 Every time Phil Robertson shows up for an interview he makes news: in an industry built on glitz and glamor, Phil has no facade.

Duck Commander’s interview with GQ has made more news, and landed the patriarch in Duck Dynasty time-out. Phil quite openly told GQ that he could not imagine men enjoying intimacy with other men. And yes, he was quite plain-spoken, as always.

When asked about sin Phil responded:

Everything is blurred on what’s right and what’s wrong… Sin becomes fine.

Phil and his family claim to be Christian, but Phil’s lies about an entire community fly in the face of what true Christians believe. He clearly knows nothing about gay people or the majority of Louisianans — and Americans — who support legal recognition for loving and committed gay and lesbian couples.

Phil’s decision to push vile and extreme stereotypes is a stain on A&E and his sponsors who now need to reexamine their ties to someone with such public disdain for LGBT people and families.

Phil issued a statement in answer:

I myself am a product of the 60s; I centered my life around sex, drugs and rock and roll until I hit rock bottom and accepted Jesus as my Savior. My mission today is to go forth and tell people about why I follow Christ and also what the bible teaches, and part of that teaching is that women and men are meant to be together.

However, I would never treat anyone with disrespect just because they are different from me. We are all created by the Almighty and like Him, I love all of humanity. We would all be better off if we loved God and loved each other.

Now the next move was from A&E, who have reaped the high ratings from the Duck Dynasty show. Rather than side with Phil, who has never displayed hateful behavior, but always been forthright and immovable with his biblically based worldview, A&E caved to the gay and lesbian activists.

We are extremely disappointed to have read Phil Robertson’s comments in GQ, which are based on his own personal beliefs and are not reflected in the series Duck Dynasty.

His personal views in no way reflect those of A&E Networks, who have always been strong supporters and champions of the LGBT community. The network has placed Phil under hiatus from filming indefinitely.

As for me, I support Phil Robertson and am wondering what the fall-out will be. Millions of people across this nation watch Duck Dynasty and love the Robertsons. Why?

Because Phil and Miss Kay, Uncle Si, Willie and Korie, Jase and Missy, Jep and Jessica are real people who love each other, love God, love this country and happen to excel at making duck calls!

Does A&E have any idea how hungry good people of faith in America are for entertainment that does NOT insult our faith but celebrate it? Do those A&E executives have an inkling why the show is a hands down, smashing success?

The Robertsons live by the Book. They’re not perfect, and that imperfection makes it all the more funny and relatable. But ultimately they stand for the principles of the Word.

I would caution A&E about bowing to the whims of GLAAD and other groups: that may be 2-5% of the population at most.

But there our MILLIONS of us Americans who are sick and tired of being called hate-mongers and homophobes just because we recite and live by scripture.

And those millions who tune in to watch the Robertson clan every week? Well, we may not be so inclined if you leave Phil off the show and monkey with this family.

Think about it A&E. Think long and hard about what you’re doing.