Leave it to Obama to showcase his frat boy mentality at the funeral of a foreign dignitary no less.

Obama actually took a “selfie” at the funeral of Nelson Mandela. Ok, it took a bit of prodding by the white folks he was ignoring Michelle for, namely British Prime Minister David Cameron and Danish Prime Minister Helle Thorning Schmidt. How could he let himself be taken in by these white folks?! Barack “I’m African…sort of” Obama should be ashamed of himself.

In looking at this picture, one would never believe that these people are at a funeral. They appear to be a boring opera (redundant, I know), or at some college kegger. It’s hard to see, but notice a man who looks like Eric Holder behind Obama, ducking. I’m not sure if he thinks he will be arrested for crimes against humanity or if he is hiding from embarrassment.

Michelle Obama sees what’s happening to her right, but appears to want to have plausible deniability as she looks straight ahead. Nevertheless, she has that “I can’t believe I fell for this guy once upon a time” look on her face. I have to admit, I’m beginning to sympathize more and more with the plight of Michelle Obama, a woman whom I have derided for appearing so sullen most of the time. I realize the white side of Barack Obama has been her cross to bear.

However, we all know that whether Obama is acting black or white, both sides of him are equally detestable.

What we do know is that by the end of it all, Michelle and Barack had done a seat swap. 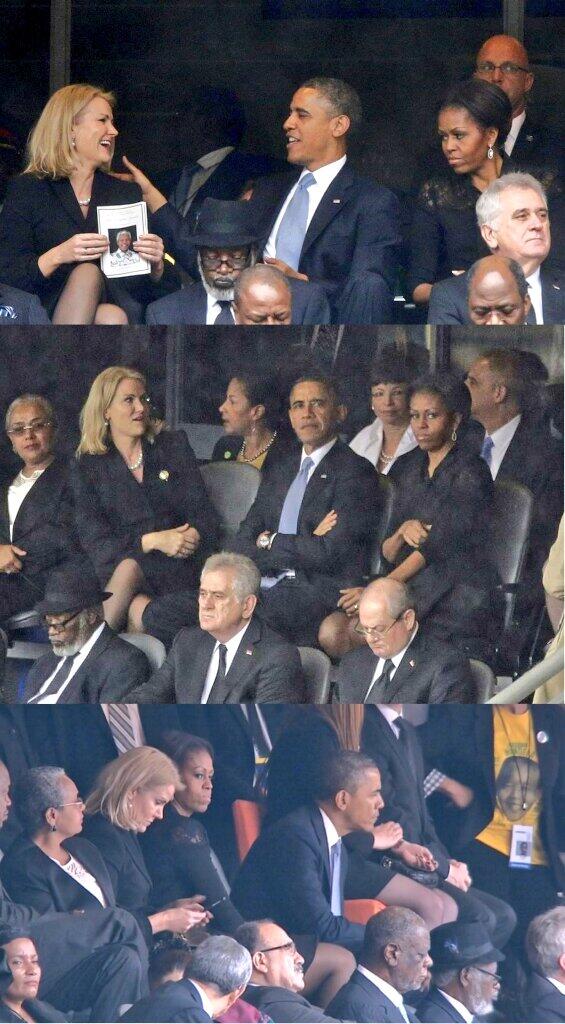